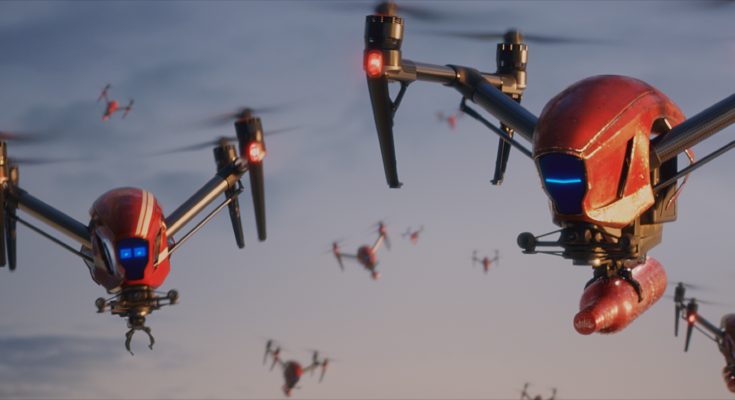 Budweiser will be giving away eight million Red Light Cups – noise activated cups which light up as fans celebrate – in more than 50 countries, as part of its biggest-ever integrated campaign, celebrating its sponsorship of the FIFA World Cup 2018.

The marketing activity kicked off this week in more than 50 countries, with the unveiling of the beer brand’s new global advertising campaign, “Light Up the FIFA World Cup”, featuring drones delivering Budweiser to fans around the world. The TV ad goes live in the UK on May 13th during the football Premier League Final.

Every beer at official 2018 FIFA World Cup stadiums will be served in a Budweiser Red Light Cup. For fans in the UK, the Red Light Cups will be given away at Budweiser viewing parties and events, and in special Budweiser packs in ASDA stores nationwide, as well as being available via on-pack competitions.

In the UK, Budweiser’s “Light Up the FIFA World Cup” will have a significant TV presence through Budweiser’s partnership with ITV, which has exclusive broadcast rights to half of all FIFA World Cup games, including the opening match on June 14th, and England’s final group game against Belgium. Through this, Budweiser will have direct TV ad presence in and around the live games, driving prime brand association with the tournament.

The ad shows thousands of drones carry bottles of the FIFA World Cup tournament’s Official Beer from its brewery in St. Louis, Missouri, where Budweiser has been brewed since 1876. The journey of the drones comes to an end when bottles of Budweiser are delivered directly into the hands of spectators across the globe; the UK’s footage shows football fans celebrating in the local pub, since current UK law bans alcohol from being consumed in stadia.

Brian Perkins, VP Global Marketing at Budweiser, said: “As the most watched sporting event on the planet, the FIFA World Cup is the ultimate opportunity for Budweiser, the world’s most enjoyed beer, to connect with billions of passionate football fans globally. Our campaign is the largest in our company’s history, and it demonstrates how we are bringing together fans from around the world over a beer and their shared passion for football… [it] captures the celebratory, upbeat and premium experience of the Budweiser brand, and fans will continue to see this come to life through our ongoing activations for the 2018 FIFA World Cup.”

In the UK, Budweiser will be deploying a Chatbot –named the Bud Bot – to provide the ultimate FIFA World Cup guide for the UK’s football fans, driving meaningful relationships between consumers and Budweiser over the course of the tournament.

The Bud Bot will create a hub for avid football fans, offering a platform to vote for the official Man of the Match and enter once-in-a-lifetime competitions, signposting Budweiser-stocking bars and stores, and offering home deliveries of Budweiser to enjoy while watching games.

As part of celebrating euphoric moments on and off the pitch for the tournament, Budweiser has created the Bud Boat, which will be cruising down London’s River Thames hosting screening parties, DJs, bars and more. Fans are being invited to apply for tickets for the boat.

Sascha Cordes, Senior Brand Manager at Budweiser UK, observes: “Football, the beautiful game, is more than just a sport – and the 2018 FIFA World Cup is more than just an event. It’s an epic global party that promises to bring not just the nation, but the world together. We’ve been more ambitious than ever with our ‘Light Up the FIFA World Cup 2018’ campaign and want to celebrate the unrivalled energy of our football fans with unmissable experiences and surprises throughout. We can’t wait to get the celebration started!”

Budweiser has a strong commitment to football globally, having served as official beer sponsor of the FIFA World Cup for over 25 years. It has an ongoing commitment through the 2018 and 2022 tournaments.

While Budweiser will serve as the official beer of the 2018 FIFA World Cup Russia, Anheuser-Busch InBev will leverage its high-quality portfolio of beers around the world by once again extending local sponsorship rights to its leading brands in select football markets, including, but not limited to, Brahma (Brazil), Harbin (China), Corona (Mexico), Jupiler (Belgium and The Netherlands), Siberian Crown (Russia), Hasseröder (Germany) and Beck’s (Italy), among others.