Home Brexit Everyone should show some general affection at Christmas 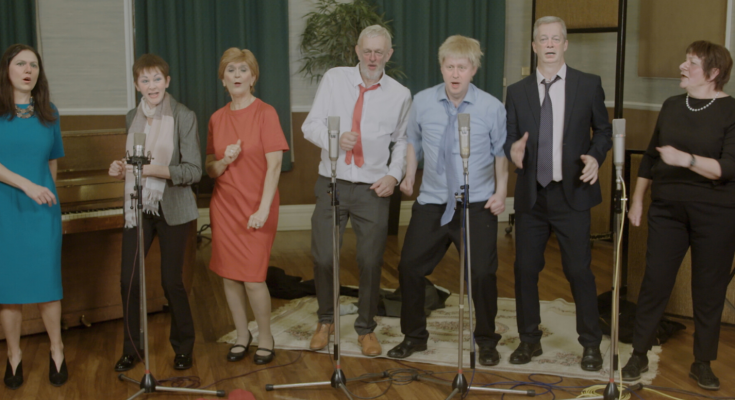 Everyone should show some general affection at Christmas

Dec 11, 2019, 12:43 pmComments Off on Everyone should show some general affection at Christmas

UK political leaders join forces to embrace the Christmas spirit and heal the world of hate, through a powerful rendition of ‘Do they know it’s Christmas’.

However, all is not as it seems, as the incredible series of scenes are from a good-humoured yet thought-provoking video by creative collective, Campaign for Common Decency.

Boris Johnson, Jeremy Corbyn, Nicola Sturgeon, Jo Swinson, Arlene Foster, Nigel Farage and Caroline Lucas, are seen swapping studio debates for the recording studio. The unlikely group recorded a unique version of the beloved charity hit, to remind people to be a little kinder to one another during such a challenging time in politics.

The footage has been created 35 years after the iconic ‘Do they know it’s Christmas’ charity single by Band Aid, showing how Deepfakes can be used positively and peacefully – while raising awareness of the importance of coming together through love, not hate.

Taking two weeks to create, the creative collective Campaign for Common Decency partnered with some masters of Deepfake and VFX technology, to show UK political leaders as they’ve never been seen before as part of their #GeneralAffection campaign, to stop the often abusive rhetoric seen on TV and social media which can at times spill out onto British streets.

A spokesperson from Campaign for Common Decency said: “Everyone’s feeling the weight of the upcoming election. At a time of year when we should all be celebrating coming together, we’ve never felt more divided.

We wanted to create an entertaining piece of film that reminded everyone that it’s ok to be civil with those who think differently. We just hope our squabbling leaders take note.”

The video starts with a bored sound engineer flipping through a newspaper, page by page he’s greeted by doom and gloom election and Brexit headlines. Shattering the glum scene, Boris Johnson breaks through the doors of the recording studio and waves to the sound engineer, much to his dismay.

Rather than being at loggerheads, the film reveals a playful exchange between the political party leaders as they come together to create a soulful rendition of the song, complete with Nicola Sturgeon on drums and Nigel Farage on the ukulele.

Ahead of the General Election this Thursday, Campaign for Common Decency has released the video and asked politicians to stop using divisive language and to help heal a divided United Kingdom through collaboration, civility and humility helping people of the UK reach a better future, together.