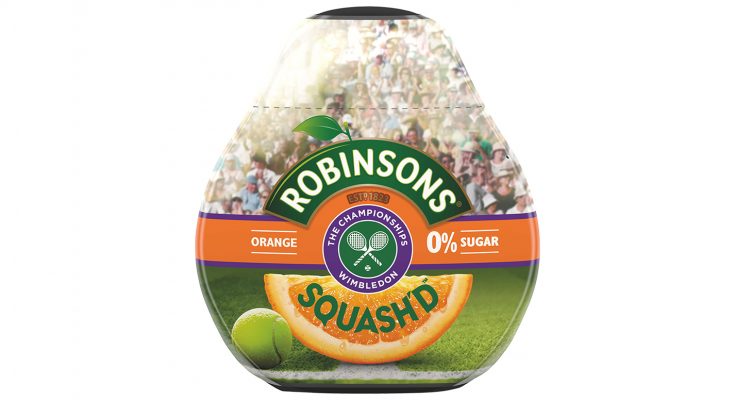 Robinsons, the leading GB squash brand, is returning to Wimbledon as the official soft drink sponsor and taste of The Championships for the 83rd consecutive year.

This year, Robinsons will support Wimbledon with a £1m marketing campaign, including limited edition merchandise and packs, sampling activity, social media support and a Robinsons pop up café, to drive even further brand exposure throughout The Championships.

With sustainability front of mind, to help reduce the amount of plastic at The Championships, which receives nearly 500,000 attendees and serves close to a million drinks each year, Britvic has introduced new Robinsons personalised reusable drinks bottles. Visitors will be able to purchase the personalised bottle for £7, or just £5 if they return an empty bottle of Refresh’d for recycling to Robinsons’ Play Tennis Café.

Kevin McNair, GB Marketing Director, Britvic says: “Providing consumers with reusable drinks bottles at Wimbledon is part of our ongoing commitment to tackling plastic pollution. We are proud of the fact that all Robinsons PET plastic bottles are fully recyclable in the UK, with 99% of local authorities collecting PET at the kerbside. Plus Robinsons, due to the fact it’s a concentrated drink, uses less plastic per serving compared to many other soft drinks.”

To help fans stay refreshed, Robinsons will also be offering free samples of Refresh’d to consumers in the queue and encouraging visitors to fill their reusable bottles, paper cups or own bottles up for free with their brand-new Fruit Creations range.

Robinsons Squash’d packs have also been given a makeover with a limited-edition Wimbledon pack design.

A supporting social media competition is being run around The Championships, with four pairs of ‘money can’t buy’ VIP tickets and 100 reusable drink bottles prizes given away per week for four weeks, up until July 5th. To be in with a chance of winning, consumers have to create and name a new Fruit Creations flavour.

The Robinsons partnership with Wimbledon, one of the most quintessentially British relationships in history, was born in 1935 when Robinsons’ original Lemon Barley Water was first served at Wimbledon to refresh players during breaks. Since then, Robinsons has sponsored The Championships annually.

From its beginnings as a one flavour brand, Robinsons now has six ranges in its portfolio, having launched Robinsons Fruit Creations earlier this year and Robinsons Refresh’d in 2017, which was named as the No.1 soft drinks NPD launch of 2017.

The Robinsons brand is owned by Britvic.