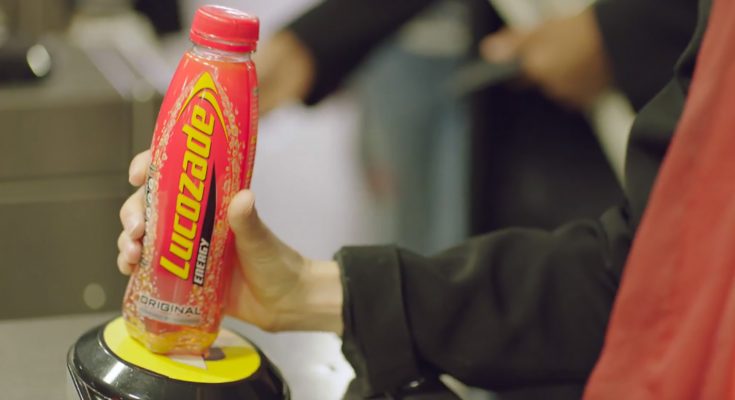 Team GB gymnast Nile Wilson, Britain’s Got Talent finalists Twist and Pulse and ballet star Alessia Lugoboni have teamed up with Lucozade Ribena Suntory and Transport for London to promote an offer for commuters of free journeys on the London Underground, using ‘contactless’ Lucozade Energy bottles.

From May 30 to June 2 at Oxford Circus Station during ‘Whoosh Hour’, Lucozade brand ambassadors will be handing out thousands of limited edition Lucozade Energy bottles with contactless chips, like the ones found in TfL’s Oyster Card, embedded in the base. Lucky recipients will be able to use the bottles like Oyster Cards for one free Underground journey.

Lucozade Energy also enlisted Wilson, Twist and Pulse and Lugoboni to help promote the activation with three films featuring them using their talents to get through the station to their tube trains. The contactless bottle give-away and the videos are in support of the brand’s ‘Find Your Flow’ campaign message. The Lugoboni film has been posted to YouTube.

Lucozade Ribena Suntory is putting a considerable marketing budget behind the various offshoots of the umbrella Lucozade brand at the moment. A week ago, it launched a new campaign for Lucozade Sport featuring an on-pack promo offering consumers the chance to win more prizes the more active they are, including fitness trackers, gym memberships, tickets to events such as the FA Cup Final, England football matches, the Tour de France, an Adele concert and holidays to Australia, the US and the Middle East.

At the beginning of April, Lucozade Zero and fashion retailer Missguided announced a collaboration, ‘Zero To Pay’, which was brought to life through on-pack promotion and experiential marketing. The on-pack promotion offered consumers a range of discounts which could be unlocked through codes on mini cans of Lucozade Zero. Targeting city centres, train stations and shopping centres, a sampling campaign offered bespoke miniature cans featuring unique Missguided discount codes. The activity was bolstered at high footfall locations with a ‘Zero to Pay’ nail bar, offering Lucozade Zero-inspired complimentary nail art.