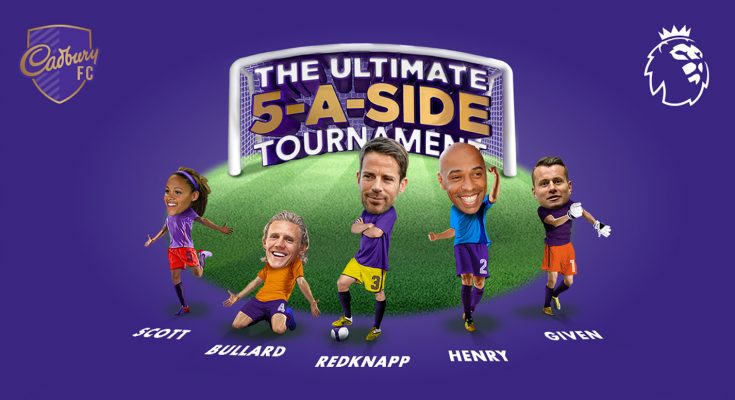 Cadbury is launching a new promotion, as part of its successful partnership with the Premier League, which offers consumers the chance to compete in a 5-a-side football tournament with five football stars; Thierry Henry, Jamie Redknapp, Shay Given, Jimmy Bullard and Alex Scott.

Running from April 30th until June 30th 2018, the competition offer 13 prize packages, which include entry for a team of six (the winner plus five friends) into a 5-a-side football tournament at Powerleague, Wembley, with the stars. Before matches start, competition winners will have the chance to mingle with the stars at a meet and greet including a question and answer session and a photo opportunity.

To enter the competition, consumers need to buy one of Cadbury’s singles, including number one selling adult brand Twirl, Wispa, Double Decker, Crunchie or Boost, and enter the barcode found on their pack at www.Cadbury5aside.com.

In addition to the 5-a-side football tournament packages, there is an exclusive promotion for the impulse channel offering 100 cash prizes, ranging up to £1,000.

Impulse channel retailers are also being targeted with a trade promotion. Stores which stock the participating products and display the related POS material and where winning packs are purchased will receive the same cash prize as the consumer gets.

Cadbury says previous promotional campaigns based around its Premier League partnership have been extremely successful at growing penetration Year-On-Year in grocery multiples.

The latest competition will be supported by a £1m marketing spend, including an OOH campaign, social media and PR support.

Raphael Capitani, brand manager for Cadbury singles, says: “The Cadbury-Premier League partnership has already proven to be a successful collaboration, due to strong competitions with unique experiences up-for-grabs, and we hope this latest promotion will do the same. Our newest competition offers consumers a money-can’t-buy prize with footballing legends as well as hundreds of cash prizes to help create further excitement and drive sales and frequency in singles. What’s more, the retailer has a chance to win big, too.”

Cadbury kicked off the second phase of its Premier League partnership in January 2018 with two promotions.

One, on Cadbury Dairy Milk, offered the chance to ‘Win a Legend’, which meant an experience day with a Premier League legend (Thierry Henry, Ian Wright, Jamie Redknapp or Michael Owen), plus thousands of instant win prizes, including pairs of match tickets and Cadbury Premier League merchandise, when they bought a ‘legendary’ product from the Cadbury Dairy Milk range.

The second, Finders Keepers, on Cadbury Fingers biscuits, offered the chance to win instant prizes of match tickets, stadium tours, TV sports passes and Cadbury Fingers packs, or the grand prize – presenting the Golden Glove trophy to the goalkeeper who has kept the most clean sheets at the end of the Premier League season, plus a VIP experience for their chosen guests on the day.

The Cadbury brand is owned by Mondelēz International, the global snacking company with 2016 net revenues of approximately $26 billion. Mondelēz is a world leader in biscuits, chocolate, gum, candy and powdered beverages, with power brands including Oreo and belVita biscuits; Cadbury Dairy Milk and Milka chocolate; and Trident gum.