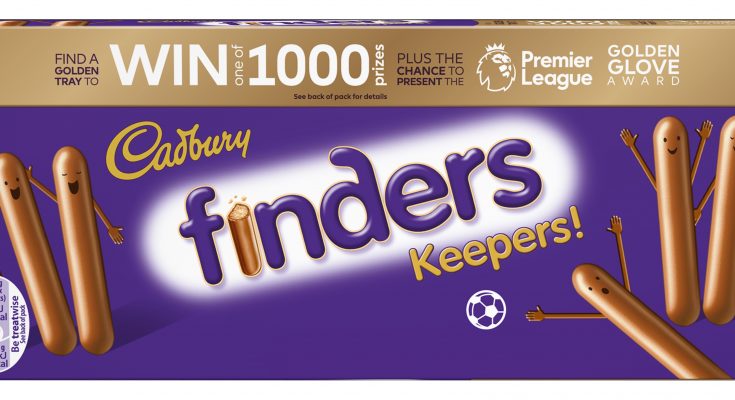 Cadbury’s Premier League football partnership is moving into biscuits with the launch this month (January 2018) of an on-pack promotion for Cadbury Fingers – Finders Keepers.

Promotional packs will see Cadbury Fingers renamed for a limited period while its Finger characters will play goalie on promotional packaging. An on-pack promotion offers consumers a chance to win one of 1,000 prizes or a money-can’t-buy grand prize – presenting the Golden Glove trophy to goalkeeper who has kept the most clean sheets at the end of the Premier League season, plus a VIP experience for their chosen guests on the day.

Consumers who find a golden tray inside their promotional pack will be entered into a draw for the grand prize. Everyone who buys a pack, whether they find a golden tray or not, can enter for the chance to win one of the instant prizes, which include match tickets, stadium tours, TV  sports passes and Cadbury Fingers packs. To find out if they have won an instant prize, consumers simply have to email their promotional pack code and contact details to Cadbury Biscuits.

The promotion will run from January 15th until May 31st 2018, with an earlier deadline of April 27th to enter the draw for the grand prize. The Finders Keepers promotion will be supported by PR, social media and digital activity.

Chiara Missio, Marketing Manager for Cadbury Biscuits, says: “Cadbury Biscuits is all about bringing joy to the category, Cadbury Fingers being a prime example, and many consumers find joy within Premier League football so it’s another perfect partnership.”

Missio adds: “Cadbury Fingers is now worth £27m and is the UK’s number one brand in Sweet Treats, so we believe by introducing the first on-pack promotion in a number of years with unique and exciting prizes, we will help drive incremental sales for the category.”

The Cadbury brand is owned by Mondelēz International, the global snacking company with 2016 net revenues of approximately $26 billion. Mondelēz is a world leader in biscuits, chocolate, gum, candy and powdered beverages, with global Power Brands including Oreo and belVita biscuits; Cadbury Dairy Milk and Milka chocolate; and Trident gum.