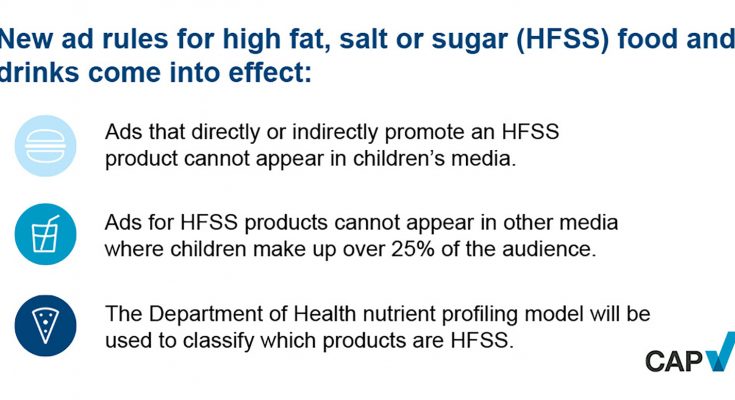 Tough new rules banning ads and promotions for food and drinks high in fat, salt or sugar (HFSS) from appearing in children’s non-broadcast media come into effect on Saturday 1 July.

The Committee of Advertising Practice (CAP), the body which writes the CAP Code – the rules which marketers in the UK are required to follow, under the country’s highly-regarded self-regulatory system for advertising and marketing – has made the changes to bring the rules covering non-broadcast media (which include the vast majority of promotional campaigns) into line with the rules covering broadcast (TV and radio).

Laura Kelly, Regulatory Adviser at the Institute of Promotional Marketing (IPM), says: “The CAP Code changes affect the way we promote HFSS (high fat, salt or sugar) products to children and families. These changes are a result of industry-wide consultation and represent a significant shift in the way responsible promoters want to market their brands. Agencies need to understand the impacts on campaign planning and make sure they take into account the changes when considering campaigns around HFSS brands. We are ready to advise brands and agencies that plan to use promotional campaigns which are likely to be seen by large number of under-16s on how the rules affect them.”

The IPM is a stakeholder in CAP and is represented on the CAP Committee. It has been closely involved in the process of drafting the latest changes to the CAP Code.

The changes will apply to media targeted at under-16s and will mean a major reduction in the number of ads children see for HFSS products, according to CAP. Where media targets under-12s, then there are even stricter rules which must be followed.

The IPM’s Laura Kelly adds that the new rules are complex and promoters must make sure they understand them. She has written a blog post for the IPM’s website highlighting some of the main issues and also providing links to advice from CAP and the Advertising Standards Authority (ASA), the body which investigates complaints about marketing in the UK, on the new rules.

Particular areas of concern exist around brands where more than half the products count as HFSS (which under the new rules mean even non-HFSS products are subject to the same restrictions) and on-pack and in-store promotions.

HFSS products can still use on-pack and in-store promotions, but any promotional activity must not then appear in broadcast or non-broadcast media advertising.

While the new rules impose new curbs on how HFSS products may be marketed to under-12s, they also relax the rules for products which can be classified as healthy.

So while ads and promotional marketing for HFSS products will not be allowed to use promotions, licensed characters and celebrities popular with children, marketers will now be able to use these techniques to better promote healthier options.

Carey Trevill, Managing Director of the IPM, is the organisation’s representative on the CAP Committee. She comments: “Government has rightly addressed the issue of obesity in this country, asking the marketing community to step up to the plate over the way we self-regulate. The consultation with the advertising and marketing community proactively set in motion the changes we see in the CAP Code now and address how we promote to children and their families. With both CAP and BCAP Members and the wider industry collaborating, consumers and shoppers will see a healthier approach to the way HFSS brands approach campaigns through the new rules.”

Trevill adds: “The industry and the IPM have been communicating this change for some months now and of course we want to ensure our Members are able to translate the new rules to their campaigns without encountering issues. We welcome the changes and look forward to seeing the resulting campaigns that embrace the new ways of working.”

The new rules were created following a full public consultation last year by CAP, and reflect restrictions already in place on TV. The new rules apply to children’s non-broadcast media (including print, posters, cinema, online and in social media). Crucially, ads for HFSS products will no longer be allowed to appear around TV-like content online, such as video-sharing platforms, if it is directed at children.
The new rules come in response to changing media habits amongst young people, with research showing that youngsters aged 5-15 are spending around 15 hours each week online – overtaking time spent watching a TV set. They also respond to wider concerns in society about the public health challenges surrounding childhood obesity and what part the advertising industry can play in helping to change our children’s relationship with less healthy foods.

In summary, the new rules state:

CAP recognises the multiple and complex factors, beyond advertising, that can be instrumental in childhood obesity; including parental influence, sedentary lifestyles and education.  While the evidence shows that advertising has a modest effect on children’s food preferences, CAP believes the new ad restrictions will still have a positive impact in reducing harm to children.

Chairman of CAP, James Best said: “The tougher new advertising food rules are a significant and positive change designed to help protect the health and wellbeing of children. These measures demonstrate the advertising industry’s continuing commitment to putting the protection of children at the heart of its work. The new rules will alter the nature and balance of food advertising seen by children and play a meaningful part in helping change their relationship with less healthy foods.”