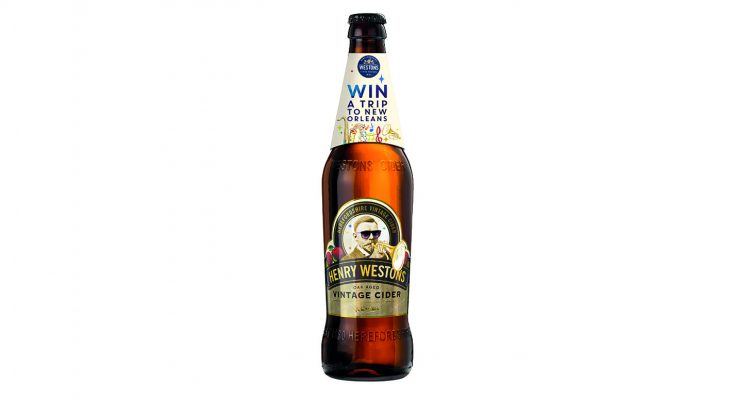 Westons Cider is ramping up investment behind its exclusively off-trade brand, Henry Westons, with a planned marketing spend of £3.5m over the next three years, including a partnership with the Cheltenham Jazz Festival, sampling and an on-pack promotion offering consumers a chance to win a trip to New Orleans plus tickets to the New Orleans Jazz Festival.

The Herefordshire-based premium cider-producer is aiming to drive further growth and increase market share for its category-leading brand with its marketing activity, which also includes a national TV advertising campaign.

Henry Westons is also scaling up its partnership with Cheltenham Jazz Festival. As principle partner, the crafted premium cider brand will benefit from high visibility across the established six-day festival and will be front of mind for festival-goers thanks to the ‘Henry Westons Big Top’ on the festival site.

The partnership with the Cheltenham Jazz Festival, which just took place over the May Bank Holiday weekend, included sampling and the return of ‘Henry Westons Sessions’ featuring stripped-back, acoustic performances from the likes of Corinne Bailey Rae, Rick Astley and Imelda May.

Further supporting the campaign, the on-pack promotion will appear on 3 million bottles of Henry Westons during May, June and July, offering consumers a chance to win a trip to the birthplace of jazz, New Orleans, plus tickets to the New Orleans Jazz Festival.

2018 marks the third year of increased investment for the Henry Westons brand which is firmly established as a ‘must-stock product’ for the convenience and grocery retail channels, reinforcing the £37m brand’s position as the UK’s number one glass bottle apple cider.

“Henry Westons is a star performer within the Westons Cider portfolio and continues to go from strength to strength,” explains Tim Williams, Henry Westons Brand Manager at Westons Cider. “The brand’s impressive growth is driven by an in-depth understanding of our target consumer, and the reliably smooth and rounded flavour that gives Henry Westons its character.”

Matthew Langley, Insight and Innovation Manager at Westons Cider, adds: “This fantastic campaign for Henry Westons comes as we release our third annual cider report, which reinforces the key role that traditional crafted ciders like Henry Westons have to play in growing sales for off-trade retailers, large and small. Glass bottle cider accounts for more than £1 in every £3 spent in the off-trade and this format continues to grow by +2.4% year on year, so it is essential that retailers continue to stock the brand that remains the main driver of that growth, Henry Westons.”