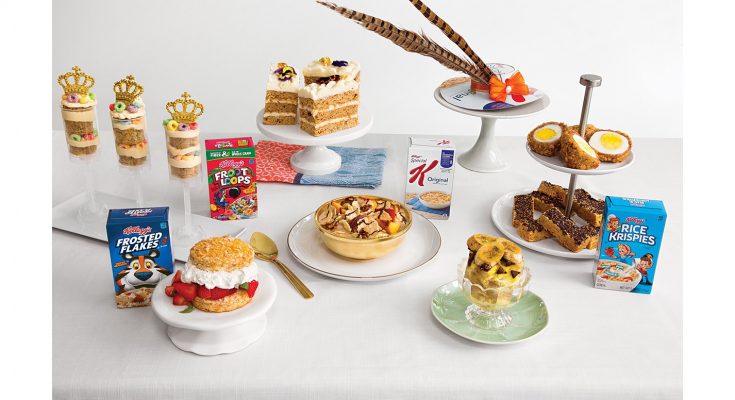 May 08, 2018, 17:23 pmComments Off on Kellogg’s NYC Café to celebrate royal wedding with breakfast bash

To celebrate the wedding of Prince Harry to American actress Meghan Markle – which takes place at 5.30am New York Time – Kellogg’s NYC Café, in iconic Union Square, New York, will open its doors for early risers to watch the televised ceremony, enjoy a modern cereal-centric breakfast and even create their own Kellogg’s-inspired fascinator from a cereal box.

Kellogg’s – which holds a Royal Warrant from the Queen – has teamed up with former royal chef Darren McGrady to create a celebratory, multicourse breakfast that elevates the watch party experience and helps cereal lovers reimagine the breakfast staple. The company has also linked with fashion designer Kelly Dempsey (who came to fame on the US TV show Project Runway, in which she way runner-up in 2014) to host a live demo to show guests how to create a cereal box fascinator hat with a regal twist.

Kellogg’s is also offering US cereal lovers the opportunity to join in the fun, with DIY recipes and tutorials to throw a cereal-inspired watch party of their own.

McGrady, who spent 15 years with the royal household cooking for Queen Elizabeth II, Diana, Princess of Wales and Princes William and Harry, and has also cooked for five US Presidents, says: “There are plenty of ways to add regal flair to a meal, and I’m thrilled to demonstrate that with something as fun and exciting as cereal. Whether you’re celebrating this global event with Kellogg’s in NYC or re-creating the menu for your own guests, you’ll be wowed by all of the ways you can reimagine cereal beyond the bowl.”

For any royal family enthusiasts who oversleep, select menu items will be available for purchase following the early-morning affair.

Kellogg’s NYC is an “immersive cereal experience” which opened in Union Square in December 2017 and covers 5,000 square feet, will be celebrating the upcoming royal nuptials and other exciting announcements on Instagram and Facebook. It replaces an earlier version which opened in Times Square in July 2016.