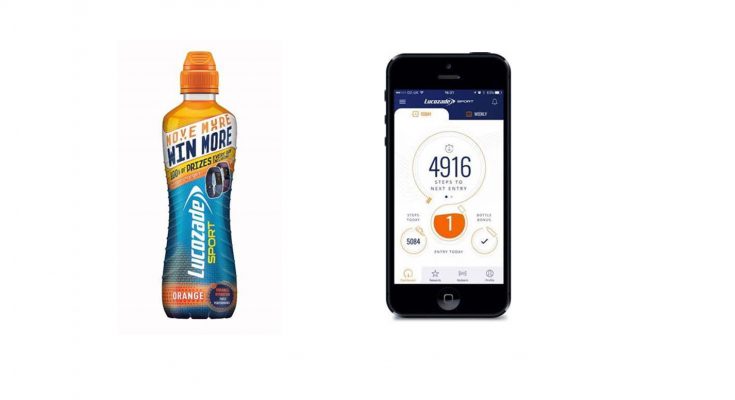 Lucozade Ribena Suntory is running an on-pack promo for its Lucozade Sports brand which offers consumers the chance to win more prizes the more active they are, including fitness trackers, gym memberships, tickets to events such as the FA Cup Final, England football matches, the Tour de France, an Adele concert and holidays to Australia, the US and the Middle East.

For every 5,000 steps – or the cycling or swimming equivalent – consumers register using the brand’s Made to Move app, they get one entry into a daily draw with thousands of prizes on offer, including FitBit fitness trackers and annual gym memberships.

If they qualify for three daily entries in a week, then they get entered into the weekly prize draw, with high value prizes including tickets to the FA Cup Final, tickets to the British Grand Prix, tickets for an Adele concert, a trip to the Tour de France and holidays to Australia, Dubai, Abu Dhabi and San Francisco.

The Made to Move app for the promotion was developed for Lucozade Sport by agency The Big Kick. The app, which is available on the iTunes store and Google Play store, has to be downloaded to an iPhone or an android device which also has Apple Health Kit or Google Fit installed, or which is synced with a FitBit tracker.

One the app is loaded and synced, every 5,000 steps, 17.25 miles cycled or 0.75 miles swum will count as one ‘Exercise Contribution’. Participants can enter up to 10 times a day via the contribution route. They can also get an extra bonus entry by inputting unique codes from Lucozade Sport bottles (only one per day).

If they make three Exercise Contributions in a calendar week, then they get an entry into the weekly draw (maximum of one a week).

The first 20,000 people to download the Lucozade Sport app will also get a one day pass to Pure Gym.

There are 200 prizes to be won every day, including pairs of entries into Tough Mudder events, pairs of tickets for the Virgin Sport Festival of Fitness event, vouchers for pitch time at Goals football centres, vouchers for of membership at Pure Gym and DW Fitness (varying from one month up to a lifetime membership), free Lucozade Sport drink bottles and free Lucozade Sport.

Northern Irish winners can claim alternative prizes for any daily prizes which are not available in Ulster.

The weekly prizes include FA Cup Final tickets for two, Silverstone Grand Prix tickets for two, six tickets to the Adele concert at Wembley on June 29 (seated in the Lucozade Ribena Suntory corporate box), two tickets to the England-Slovakia game in September 2017, two tickets to the England-Slovenia game in October 2017 and a trip to Pairs for two for the Tour de France weekend on July 22-24. All experience prizes include accommodation and a certain amount of spending money.

There are also four holiday prizes for two people to be won – a week in Australia, five nights in San Francisco, three nights in Abu Dhabi and three nights in Dubai, all including various experiences. Prize sourcing and management is being handled by Cloud Nine.

The promotion will run across 50 million bottles in store, with bonus entry code on every bottle.

The promotion is part of Lucozade Sport’s ongoing Made To Move campaign, where Lucozade Sport has pledged to get 1 million people moving more by 2020.