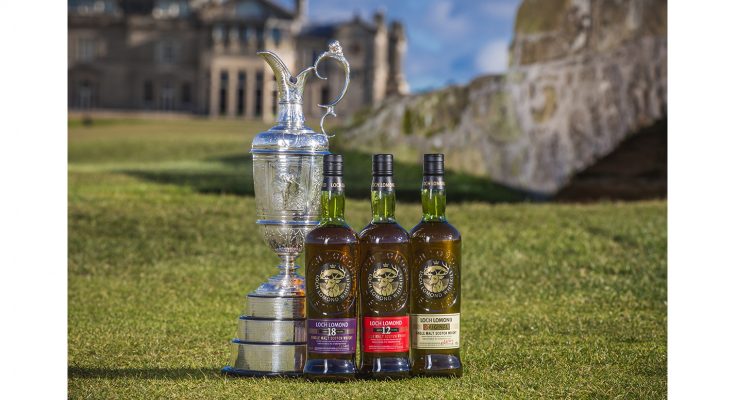 The partnership with tournament organisers The R&A includes support of the Ricoh Women’s British Open and will allow the distiller to showcase globally the full range of Loch Lomond Whiskies. It also means the distiller’s innovative and exciting range of single malts will become “The Spirit of The Open”.

The Open is the most international of the major golf championships with qualifying events across five continents. The Championship is also broadcast to 600 million households in almost 200 countries around the world.

Muriel Raguenaud, Marketing Director for Loch Lomond Group, says: “The partnership will encompass a year round programme of events both in the UK and international markets for whisky and golf fans. Some promotional activity will happen both on- and off-premises. In particular, at The Open itself, there will be a Loch Lomond Whiskies area where spectators will be able to sample our range of single malts and discover their versatility. Loch Lomond Whiskies will be the exclusive whisky poured at The Open and there will be a selection of limited edition products for sale.”

A range of in-outlet activations and Point Of Sale activities are also planned to capitalise on Loch Lomond’s partnership with The Open and the Ricoh Women’s British Open, both in the UK and in international markets. This could see consumers being offered the chance to win tickets to attend this year’s Open at Carnoustie.

Loch Lomond Whiskies will also use the partnership with The Open as a platform to create a variety of limited editions, aimed at both golf fans and whisky aficionados. The first limited editions will be released this summer and will cover a wide price range of whiskies, from tasting packs to rare vintages. There will probably be a limited edition to celebrate each Open championship.

Whisky and golf are recognised as being among Scotland’s most famous products and consumer studies suggest that there is a close affinity between the two industries, with many golf fans also demonstrating a passion for Scotch.

Founded in 1814, Loch Lomond Whiskies can trace its roots back to the Littlemill distillery, which was established in 1772 and which is thought to be one of the oldest in the world. Its current malt and grain distilleries, in Alexandria, Dunbartonshire on the banks of Loch Lomond, were built in the 1960s and are among only a few in the industry to maintain an onsite cooperage. The malt distillery at Alexandria also features a unique combination of traditional swan neck and distinctive straight-necked pot stills, enabling it to produce a diverse range of flavour profiles.

Colin Matthews, CEO of Loch Lomond Group, took ownership of the business with the backing of London based Exponent Private Equity in March 2014. Since then, the group has expanded its product range significantly, made major capital investments in its distilleries, maturation infrastructure and bottling operations and has achieved strong international growth. Its brands are now present in over 125 countries around the world.

Colin Matthews, CEO of Loch Lomond Group, observes: “We are extremely proud to have agreed this prestigious partnership and association with The R&A for The Open and the Ricoh Women’s British Open. There is an incredibly strong alignment between the worlds of whisky and golf, two of Scotland’s most iconic gifts to the world. There is also a great fit between those who follow golf and whisky, with research showing clearly that many golfers across the world enjoy a regular dram.”

Matthews adds: “Our partnership with The R&A is the perfect means for Loch Lomond Whiskies to use the fabulous platforms of both championships to grow further, both in the UK and internationally, and it also demonstrates our strong commitment and ambition to becoming a premium global brand.”

Loch Lomond Whiskies’ partnership with The Open is effective immediately and runs until 2022. The five-year period includes the playing of the landmark 150th Open in 2021 at St Andrews, the home of golf. The 147th Open takes place at Carnoustie from 15-22 July 2018.