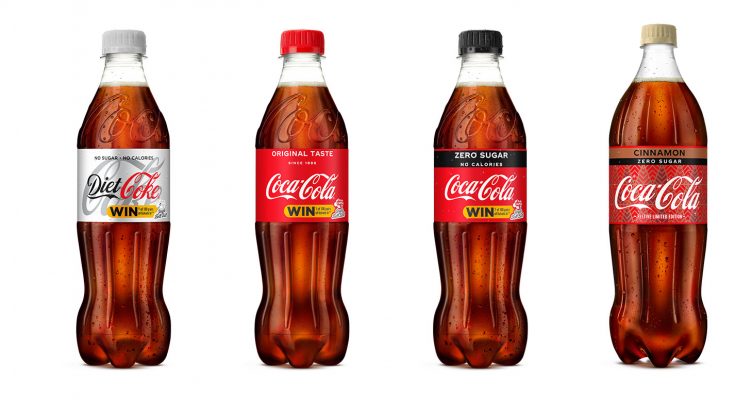 As with the other Coca-Cola zero sugar variants – Vanilla, Cherry and Peach – the Cinnamon version will be exempt from the UK’s Soft Drinks Industry Levy (SDIL), commonly knows as the Soft Drinks Tax. Under the tax, companies pay 18p per litre in tax if the drink has five grams of sugar or more per 100ml, or 24p per litre if the drink has 8g of sugar or more per 100ml.

In tandem with the new flavour launch, CCEP will be running an on-pack prize draw offering consumers the chance to win tickets to Capital Radio’s annual Jingle Bell Ball which takes place in December.

The on-pack offer will be running across on-the-go packs of Coca-Cola original taste, Diet Coke and Coca-Cola zero sugar for five weeks from mid-October.

To enter, consumers have to enter a unique code found on promotional packs on the brand’s website, to be entered into a draw to win a pair of tickets every day. There will be 100 pairs of tickets available to be won. According to a link on Coca-Cola GB’s Facebook page, consumers will be able to input their codes from October 15th 2018.

Simon Harrison, customer marketing director at Coca-Cola European Partners, says: “We’re confident that with the early arrival of our great tasting Cinnamon variant and Capital’s Jingle Bell Ball on-pack, the festive season will get off to a flying start for our customers. We’ll be back in November with even more activity that will keep Coca-Cola at the centre of Christmas celebrations for both consumers and retailers.”