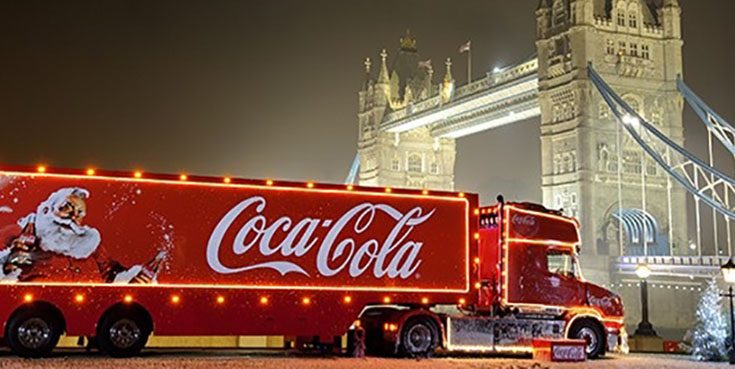 Coca-Cola has updated the truck tour experience for 2016, with visitors being able to explore a special winter wonderland before enjoying a 150ml can of Coca-Cola Classic, Coca-Cola Zero Sugar or Diet Coke. When the sun sets, the truck comes to life with a special animation powered by the crowd’s seasonal goodwill, celebrating the magic Coca-Cola brings to Christmas.

In addition to the 44 nationwide stops, Coca-Cola is also offering consumers the chance to win a personal visit to their home from the Christmas truck plus a Santa sack full of goodies worth £5,000. To enter the draw, consumers just need to buy a promotional pack of Coca-Cola, Diet Coke or Coca-Cola Zero Sugar and follow the instructions on pack.

The famous ‘Holidays Are Coming’ TV advert will also return to UK screens, 21 years since first being aired. Coca-Cola will also launch a brand new TV advert, ‘A Coke for Christmas’, celebrating the joy of giving over the festive period. The TV ad features a young boy who spreads joy through gifting the refreshing, uplifting and unique taste of Coca-Cola to those who are making Christmas a reality.

To support the message that Christmas is the season for giving, this year Coca-Cola is expanding its partnership with FareShare, the UK-wide charity that tackles food waste and hunger. An on-pack promotion will enable consumers to Donate a Meal to Someone in Need this Christmas.

Consumers just need to purchase a promotional pack of Coca-Cola, Diet Coke, Coca-Cola Life or Coca-Cola Zero Sugar which features the FareShare logo, take a photo of the label and upload it to cocacola.co.uk/donate. Coca-Cola will then donate 25p for each photo uploaded, enabling FareShare to provide a frontline charity, such as a homeless shelter or older people’s lunch club, with enough food to serve a meal to someone in need.

Finally, for the ninth year in a row, Coca-Cola is bringing back its Designated Driver campaign. Run in partnership with the Department for Transport’s THINK! Drink Drive campaign, the initiative rewards people who are driving to the pub over the festive period by offering a free second soft drink when they purchase a Coca-Cola Classic, Diet Coke, Coca-Cola Zero Sugar, Appletiser or Schweppes at participating pubs and restaurants when they show their keys at the bar.

Aedamar Howlett, Marketing Director for Coca-Cola Great Britain, says: “Coca-Cola is synonymous with the Christmas season and it’s no secret that our much-loved Holidays are Coming advert and Christmas Truck Tour mark the unofficial countdown to Christmas. This year, we’ll also put those people who work behind the scenes to make Christmas happen at the heart of our Christmas campaign. We’re proud to celebrate those that go the extra mile to make Christmas a special time of year – we all know someone who goes out of their way to put a smile on everyone’s face and make the festive time of year magical for others.”

Locations the Coca-Cola Christmas Truck Tour is scheduled to visit this year include:

Coca-Cola Great Britain is responsible for marketing 20 brands and 80 products to consumers across Great Britain. Led by Coca-Cola, one of the world’s most valuable and recognisable brands, the company portfolio includes Fanta, Sprite, Dr Pepper, Oasis, GLACÉAU smartwater, Schweppes, Lilt and Appletiser.

FareShare is a UK-wide charity that tackles hunger and food waste by redistributing good food that would otherwise go to waste to frontline charities and community groups that support vulnerable people, including homeless shelters, children’s breakfast clubs, and domestic violence refuges.