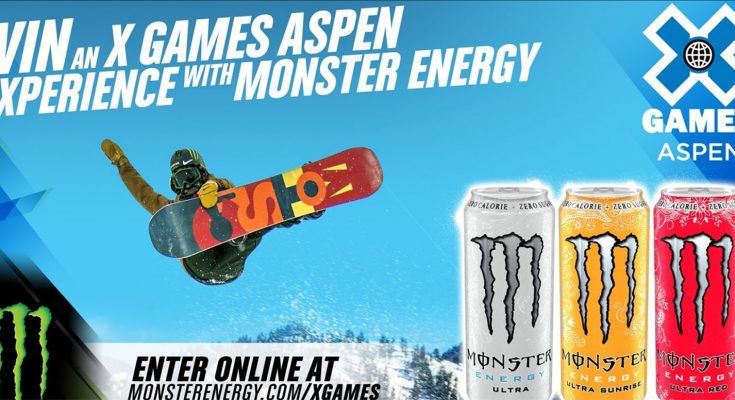 Monster Energy is running a UK promotion offering consumers the chance to win a trip to the Winter X Games in Aspen, Colorado, USA, in January 2017.

The X Games is an annual series of extreme sports events launched and run by American sports broadcaster ESPN, which broadcasts coverage alongside its sister network ABC. The original X Games were launched in 1995 and included sports such as skateboarding and motocross. The Winter X Games event series includes sports such as snowboarding, skiing and snowmobiling.

Monster is a sponsor of the Winter X Games, which is being held at Buttermilk Mountain in Aspen in 2017, and also has a team which will be competing. The prize package includes return flights for two people from the UK to Aspen, three nights’ accommodation for two people, tickets for the four days the event runs, access to the Monster Energy hospitality areas located at the event, a one day “pit pass” to the music festival held within the event and a meet and greet with a Monster Energy sponsored athlete during the event

The promotion is open for entry until the end of December 2016, and the winner and nominated guest must be free to travel to the event which takes place from January 26th 2017 to January 29th 2017.

Monster Energy is made by a US company of the same name which was acquired by Coca-Cola in June 2015. Coca-Cola now distributes the Monster range in the US, UK and other markets.

Monster uses sponsorship of sports which appeal to a younger demographic, in particular males, as a key element in its marketing. It frequently back these sponsorship deals up with on-pack and in-store promotions. Sports it is associated with include Formula 1 motor racing, rally driving, motorcycling and motocross events, monster truck events and rodeo bull riding. It is also linked to computer gaming and e-sports.