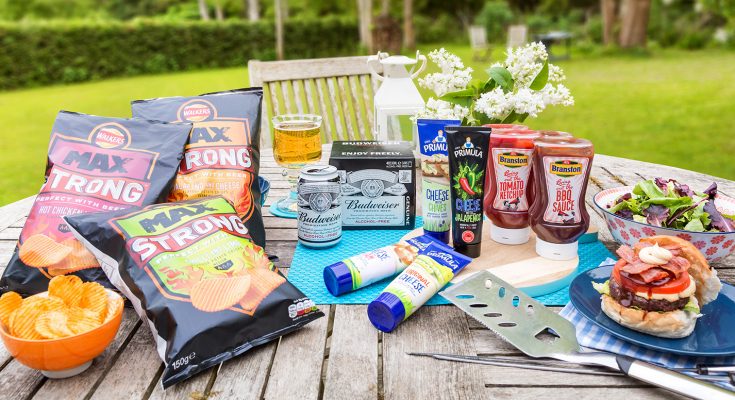 Brands including alcohol-free Budweiser Prohibition Brew, Walkers Max Strong, Branston, Primula and Bodean’s have signed on as partners for National BBQ Week, a multi-brand experiential, sampling and marketing campaign which returns for the 22nd year from Monday May 28th.

The organisers say that National Barbecue Week is one of the UK’s top awareness weeks and has, since its launch in 1997, been a “catalyst for growth in the BBQ market” according to PR Week and also being “fundamental in changing consumer attitudes to BBQ” according to Mintel and The Grocer.

Launching on Spring Bank Holiday and running from 28th May until the 3rd of June, the awareness week will be incorporating a dynamic digital, PR and media focus set to reach over 25 million people. There will also be experiential sampling at the launch of London’s ‘Summer by the River’ festival from the 1st to the 3rd June, where a further 150,000 people will be exposed to the campaign.

Competitions will be run through media and through social media channels including Instagram, Twitter and Facebook including the return of the BBQ Baptas. Consumers will be encouraged to send in videos of their fun barbecue or grilling technique and results, with the aim of winning a BBQ Bapta Award, a cash prize and a BarbiBox, full of product from the sponsors.

Along with the UK’s leading BBQ Website full of hints, tips, recipes and guides to ‘Being a Better BBQ’er’, there is also a Barbi Blog, with messages from the sponsors and chief GrillMaster, Brian George, founder of National BBQ Week.

George, who runs agency Grocery Gurus, says: “National BBQ Week is one of the UK’s biggest awareness weeks and has helped change consumer BBQ attitudes and usage from just 9 million in 1997 to over 130 million last year with the overall BBQ food and drink market being worth around £1.3 billion, up from just £150 million back in 1997.”

Grocery Gurus will also be organizing other multi-brand campaigns including WorldBeerathoN in October (to coincide with Octoberfest), Get Wine Wise in November, Mixorama (for at-home cocktails) in December, and National Wine Week, from 26th November to 2nd December.