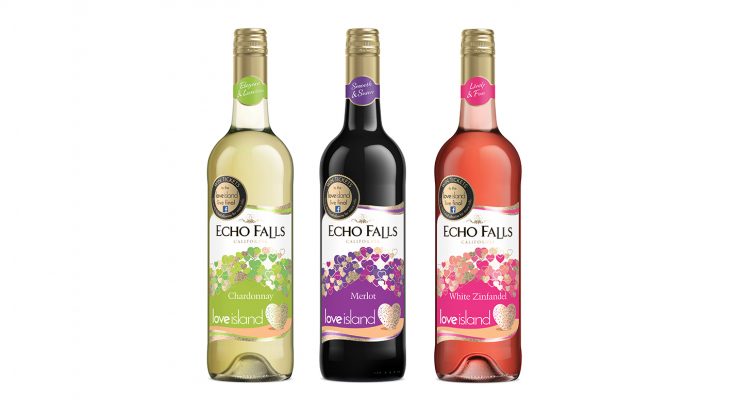 Accolade Wines has announced that its Echo Falls brand will be the drinks partner of what is likely to be the summer’s hottest TV show, Love Island 2018, on ITV2, and will be offering the chance to win tickets to the live Love Island final.

Accolade says that since its launch in 2003, Echo Falls has grown to be the second largest wine brand in the UK behind Hardys, with a sales value of £164m. Its sweeter styled Fruit Fusion sub-brand combines wine with other fruit flavours, including combinations such as strawberry and lime, raspberry and cassis and the UK’s favourite fruit fusion, Summer Berries. The Fruit Fusions range alone is worth over £60m annually.

Laurence Hinton, Brand Manager for Echo Falls, says: “We are partnering with what is probably the UK’s most talked about TV property with a huge appeal among our target audience of 18-24 year olds. Echo Falls is the second largest wine brand in the UK and this partnership allows us to tap into the fun, spontaneous side of our core consumer and engage with them on a new level. This partnership doesn’t just offer compelling airtime it translates into digital and word of mouth which is a key channel for our consumers.”

Last year’s series of Love Island was one of the biggest programmes of the summer with the final delivering ITV2’s biggest ever viewing figures.

The brand new Echo Falls TV advertisement will also been seen across key advertising breaks around Love Island and Video On Demand around the show and other key programming, as well as featuring on the ITV Hub.

Hinton adds: “Our consumers are spontaneous and sociable and they are watching and participating in the Love Island experience which extends from broadcast to digital and generates high levels of conversation in offices, universities and homes across the country. Love Island is a perfect fit for Echo Falls as both brands attract people who have the same attitude and approach to life.”

Claire Heys, ITV Brand Partnerships and Content Director, commenst: “Love Island is one of the biggest shows on TV and I’m very pleased to welcome Echo Falls on board as a partner. We know that the start of the new series is a highly anticipated event and the success of the programme means we can offer amazing opportunities for brands to work with us.”

Accolade Wines is a major global wine business based in Australia. It began as Thomas Hardy and Sons, founded in 1853, and now has operations in North America, the United Kingdom, Ireland, mainland Europe, South Africa, Australia, New Zealand and Asia. At the beginning of April 2018, US private equity firm The Carlyle Group bought Accolade for Aus $1bn. The sellers were Australian private equity firm Champ, which owned 80% of the business, and US alcohol group Constellation, which owned the remaining 20%.