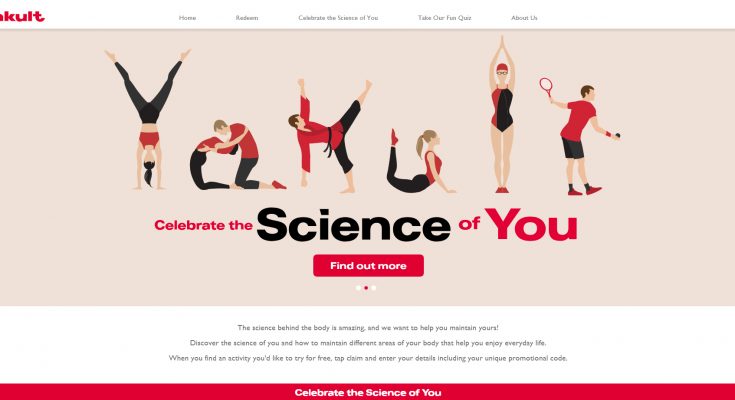 Yakult celebrates ‘The Science of You’ with new on-pack promotion

Yakult is giving customers the chance to enjoy a range of activities that are rewarding for both body and mind, in a on-pack promotional campaign created to celebrate ‘The Science of You’.

Customers can claim a free sports or wellbeing session with every promotional pack of Yakult and Yakult Light. Various activities on offer include tennis, swimming and golf lessons, personal trainer sessions and even out-of-the-ordinary experiences such as Disco Yoga and outdoor boot camps with British Military Fitness. There are over 3,000 venues taking part in the campaign nationwide.

For those more into wellbeing for the mind, Yakult has also collaborated with The Mindfulness App to offer three months free subscription to its premium meditation service.

Reshma Patel, Marketing Manager at Yakult UK & Ireland, says: “‘The ‘Science of You’ campaign aims to drive penetration over the summer-time, when people are increasingly looking for positive lifestyle choices. The simple mechanic, celebrating wellbeing and the science of the human body, connects the brand with our core values while also helping us deliver on our business objectives.”

The campaign is running until July 31st, 2018 across 2.5 million packs. Customers who register within the promotional period can still download vouchers until September 30th, with vouchers being accepted at venues until December 3rd, 2018. Promotional packs can be purchased in all major supermarkets and independents across the UK and Republic of Ireland.

To take part, consumers buy purchase any promotional pack of Yakult or Yakult Light, visit www.yakultactivities.com, register their details and enter their promotional code. They will then be able to browse thousands of independent studios, pools and gyms to find those in their local area and download a voucher. To claim their free activity, customers they must present the voucher at their chosen venue.

Campaign concept, partners and creative, which includes in-store POS, OOH media as well on-pack stickers, was developed and is being managed by London-based agency TLC Marketing. TLC also designed and built the campaign microsite, with the ‘Yakult Activities’ portal, which uses an interactive quiz to educate customers about what activities can help their body and why.

Martin Covill, Director of Business at TLC Marketing, said, “Dr Shirota, the scientist who created Yakult, believed that true health stemmed from both physical fitness and mental wellbeing. The ‘Science of You’ campaign embodies the history and vision of Yakult, but also pays homage to Dr Shirota – honouring his legacy with body and mind orientated rewards.”

TLC Marketing previously worked with Yakult on a 2015 campaign to celebrate the brand’s 80th anniversary with an on-pack ‘Culture Pass’ promotion.

TLC Marketing Worldwide is a global leader in loyalty, incentive and reward campaigns. It is the Institute of Promotional Marketing (IPM) Agency of the Year 2017 and won The Queen’s Award for Enterprise in International Trade in 2016. In the past two years, the agency has also won awards for its work with Continental Tyres, Bupa, Pallas Foods and Braun. Other clients include Eon, HSBC, First Direct and Yakult.