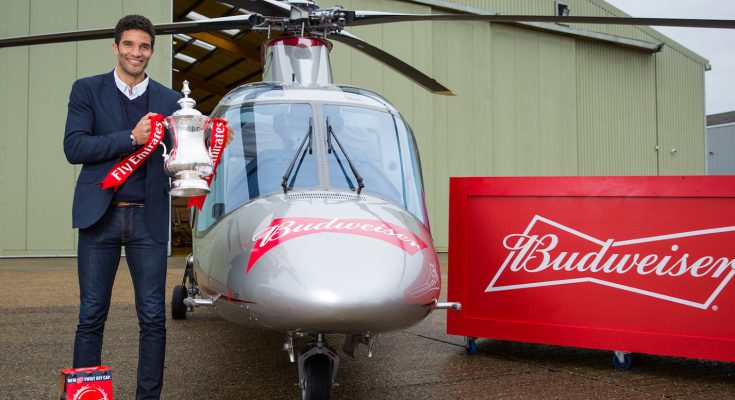 Budweiser is to reward the fans of the football team which achieves the greatest against-the-odds upset in the Third Round of the FA Cup this weekend with free beer, delivered by a helicopter with FA Cup winner David James on board.

Budweiser, the official beer of The Emirates FA Cup, has put an official Bud Chopper on standby to airdrop a Budweiser beer delivery to fans of The Emirates FA Cup’s lower-league teams which defeat their higher-ranking competitor. If no underdog victories take place, Budweiser will make the executive decision to reward the fans of the team that played the hardest on the pitch, or where the fans’ loyal support came through strongest.

The helicopter will be delivering thousands of bottles of free beer to the hometowns of the teams selected.

On Sunday 8th January from 12.00 (noon), David James and Budweiser’s dedicated team will be ready and waiting to take off from London’s Biggin Hill Airport and make its way to the home stadium of the most successful lower-league team playing in the Third Round. The Bud Chopper’s journey will be covered on Budweiser’s social channels (@BudweiserUK).

FA Cup winner, David James, says “The Third Round is an incredibly exciting and unpredictable stage in The Emirates FA Cup no matter how big your team is or what league you’re in. It’s a privilege to be able to work with Budweiser to reward the commitment and passion of all underdog teams this weekend, and celebrate the unwavering support of football fans across the UK. This Bud’s for you.”

Steph Okell, Marketing Manager, Budweiser UK, says “At Budweiser, we’re proud to be the Official Beer of The Emirates FA Cup, and celebrate great moments of ambition, unwavering belief and commitment. We think celebrating the underdog victories in the Third Round is the ultimate expression of this and is worth raising a Bud to. When the underdog defies all the odds, this is the beer we’ll drink – it’s going to be epic!”

Lucy Roberts-Hartley, The Emirates FA Cup Senior Brand Manager, says: “The Emirates FA Cup competition embodies the idea that anything is possible, with smaller teams being given the opportunity to take on Premier League giants in the Third Round. We are delighted that our partners Budweiser are celebrating the underdogs and their loyal fans over this truly iconic weekend in English football.”

This is not the first time Budweiser has given away free beer to celebrate the success of an underdog team. After the Wales team qualified for the semi-finals of the Euro 2016 football tournament in July 2016, Budweiser offered every adult resident of Wales of legal drinking age a free can of Bud. Consumers could get a voucher from a range of local Welsh newspapers or register for the offer online and download a digital voucher. Vouchers were redeemable at Tesco, One Stop and Co-op stores.