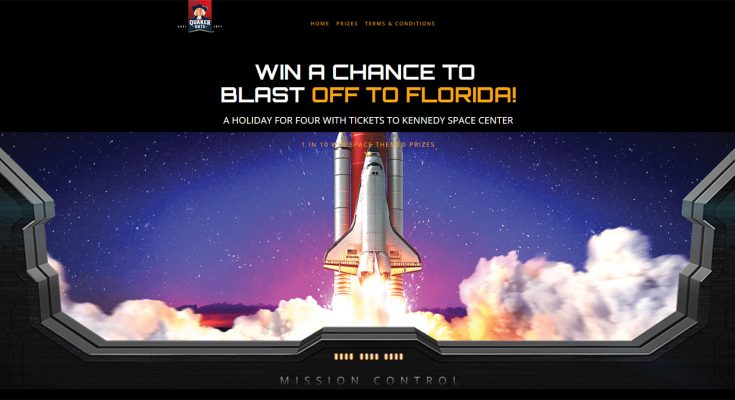 Quaker Oats has launched a new on-pack promotion giving shoppers the chance to win space-­themed prizes, linking in with the PepsiCo-owned brand’s current TV ad starring Buzz Aldrin, the second man to walk on the Moon.

The prize promotion gives shoppers the chance to win one of five holidays for four to Florida, Orlando including a visit to the Kennedy Space Centre, alongside other space-themed prizes. The promotion features a star prize draw, which is open until April 3rd 2017, and an Instant Win element which stays open until September 15th 2017.

The holiday prizes include return economy flights for four people from London or Manchester to Orlando, £200 travel allowance, car hire, a half day ‘Fly with an astronaut’ experience at Kennedy Space Center, £500 spending money and eight nights’ accommodation.

Promotional packs of Quaker Oats So Simple sachets, Family Pack and Big Bowl lines will contain a code that gives shoppers a one in 10 chance to win instantly when entered online at the promotion website, florida.quaker.co.uk.

Eric Williams, Quaker Oats Senior Brand Manager, said: “Our TV campaign featuring Buzz Aldrin will be back on air again for the whole of January. It explains that on the day Buzz walked on the moon he chose to eat oats. We wanted to launch an on-pack promotion with a space theme to tie in closely to the advert so that the two combined will really help reinforce the benefits of eating oats. It’s fantastic to be able to offer shoppers the chance to win a holiday and trip to the Kennedy Space Centre in Florida and we expect the promotion to help drive rate of sale for retailers at this key time of year.”

The brand is also adding another flavour to its Family Pack and Big Bowl offering – Apple and Blueberry.