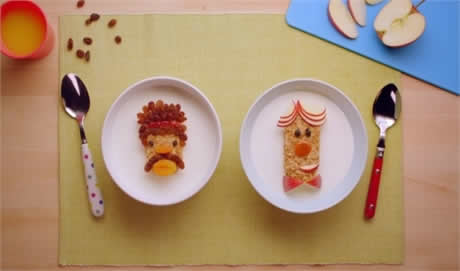 Weetabix is relaunching its successful Weetabuddies campaign with a new year-long partnership with Cartoon Network. Aimed at inspiring a new generation of cereal eaters, the campaign encourages children to get creative and start the day off in the best way possible – with a healthy nutritious breakfast.

Weetabuddy characters are based on Weetabix wholegrain biscuits and feature a range of toppings, the majority of which are fruit-based to help increase children’s fruit intake at breakfast. In addition, Weetabix biscuits are made from 100% natural wholegrain wheat and are low in sugar, salt and fat while being naturally high in fibre and a source of protein.

The Weetabuddies campaign was first launched in January 2015.

The multi-channel campaign, which goes live on 6th January 2016, aims to encourage more children to add real fruit to their breakfast. Weetabix says that the average 4-10 year old eats only half of their recommended ‘five a day’ target (excluding fruit juice).

In addition to Cartoon Network’s partnership, the brand is spending over £1.7 million in January to promote the Weetabuddies campaign across TV, in-store, social and online, as well as engaging mummy bloggers in an effort to get more kids and their families choosing Weetabix.

The company says the 2015 Weetabuddies campaign was hugely successfully, delivering an increase in sales of 14% by volume and 4% by value year-on-year. Content for the campaign generated 1.5m YouTube views, the brand’s biggest viral success, and the competition received 6,000 entries.

New for 2016, consumers will have the chance to win one of five special edition Weetabuddies soft toys (Tropicolin, Blue Barry, Coach Bananas, Raz Baz and Straws), an offer which will feature on-pack from the beginning of January. To take part, consumers will be encouraged to share their own Weetabuddies creations on the Weetabuddies website and owned social media channels.

Throughout 2016, Cartoon Network and Weetabix will work together to get kids excited about eating a good breakfast. The partnership includes sponsorship of the peak breakfast time slot on Cartoon Network for all of January, April, September and November. There will also be an on-air channel sponsorship of Cartoon Network’s sister channel Boomerang in April and September. Each sponsorship ident will center on different Weetabuddy personalities in a cereal bowl telling each other food-based funnies, hilarious enough to induce the milk snorts!

Cartoon Network has also transformed some of its most famous faces into Weetabuddies for the campaign – from Adventure Time’s Jake the dog to Regular Show’s Rigby and Powerpuff Girls’ Bubbles – so kids will be able to recognise their favourite Cartoon Network characters in their new Weetabix form.

To further support the campaign, Cartoon Network has built a bespoke Weetabix Weetabuddies microsite, where kids will be encouraged to submit their very own Weetabuddy creations and play the exclusive ‘Drench Me’ mini-game. The best Weetabuddy creations will be entered into a competition for the chance to win an iPad, and a select few will even feature on-air on Cartoon Network later in the campaign!

Richard Lawrence, Head of Brand at Weetabix, comments: “When we launched the Weetabuddies campaign last year, our aim was to build the next generation of cereal eaters by getting them excited with a fun and creative way of eating a healthy and nutritious breakfast and upping their intake of fruit. It was our most successful campaign to date, and given the level of interaction with consumers, we wanted to bring it back with an added value reward for consumers. It’s hugely exciting to be partnering with Cartoon Network, and means we’ll be on TV for 52 weeks of the year, encouraging families to get creative and enjoy a fun and nutritious breakfast.”

Zara Peters, sponsorship and promotions director at Turner Broadcasting, says: “We’re thrilled to be working with the iconic breakfast brand Weetabix to help launch the Weetabuddies 2016 campaign. Cartoon Network will feature sponsored Weetabuddies content across our on-air and digital platforms to help encourage kids to get creative and excited about Weetabix’s healthy breakfast cereal.  Cartoon Network values kids creativity and we can’t wait to see their Weetabuddy creations! We believe this campaign will remind kids that mornings can be fun.”

Cartoon Network will utlilise its digital platforms, Cartoon Network Anything and Imagination Studios, to further push the Weetabuddies campaign. Imagination Studios, an online destination that promotes creativity amongst kids aged 6 to 12, will feature a Weetabuddies ‘making of’ video.  The video will include a food stylist explaining to kids how to make their very own Uncle Grandpa Weetabuddy, using healthy toppings and Weetabix. The popular Cartoon Network Anything is a free app that allows kids to experience a stream of short, fun CN content made for the small screen, making content accessible whenever and wherever. Cartoon Network has produced a series of bespoke Weetabuddies content that kids will be able to enjoy across April and September.