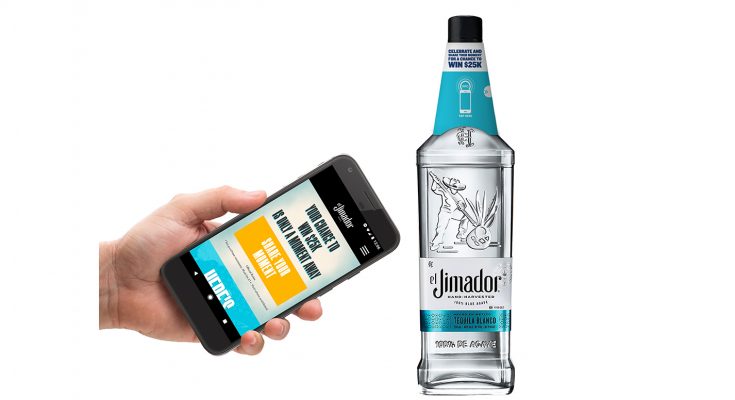 The six-figure deal is a key element of el Jimador’s omni-channel ‘Soccer Moments’ campaign, and is being heralded as the biggest ever largest NFC-related activation for a tequila brand. El Jimador is the sponsor of the Mexican National Soccer team’s 2018 US tour.

In collaboration with Thinfilm, el Jimador has incorporated NFC tags in custom bottle-neckers and branded coasters. When tapped with a smartphone in-store, at home, or on the go, el Jimador customers can instantly submit their favorite soccer story for a chance to win $25,000, custom jerseys, and other prizes. The NFC tags fully integrate with Thinfilm’s CNECT Cloud Platform and enable el Jimador marketers to view real-time tapping activity, analyze campaign performance, and uncover actionable insights.

The connected el Jimador bottles and coasters are being distributed through select retail outlets, bars, and restaurants across the United States.

Ed Carias, Senior Brand Manager for el Jimador tequila at Brown-Forman says: “Our Soccer Moments campaign is connecting us with consumers who are both fans of soccer and fans of the el Jimador brand. By leveraging the smartphone that most of us carry today, Thinfilm’s NFC solution significantly extends our ability to establish those connections, build lasting consumer relationships, and drive the success of the el Jimador brand.”

Following its Soccer Moments promotion, el Jimador plans to use Thinfilm’s NFC mobile marketing solution in a “Day of the Dead” campaign this coming October.

“It has become increasingly common for leading brands like el Jimador to position NFC as a key enabler within major omnichannel marketing initiatives,” said Davor Sutija, CEO of Thinfilm. “The Soccer Moments campaign is a perfect example.”

Thin Film Electronics ASA is a publicly listed company in Norway with global headquarters in Oslo, Norway; US headquarters in San Jose, California; and offices in Linköping, Sweden; San Francisco; London; Hamburg; Singapore; and Shanghai. Its Thinfilm solutions use NFC to connect FMCG products to the Internet of Things.

El Jimador is a premium 100% blue agave tequila made by Mexican distillery Tequila Herradura, founded in 1870. In 2007, the company was bought by Brown-Forman for $776 million. Over the past 10 years, Brown-Forman, which owns other alcohol brands including Jack Daniel’s, Southern Comfort and Finlandia Vodka, has been expanding international distribution for el Jimador and it is now sold in 136 countries, compared with the 56 countries at the time of the acquisition.