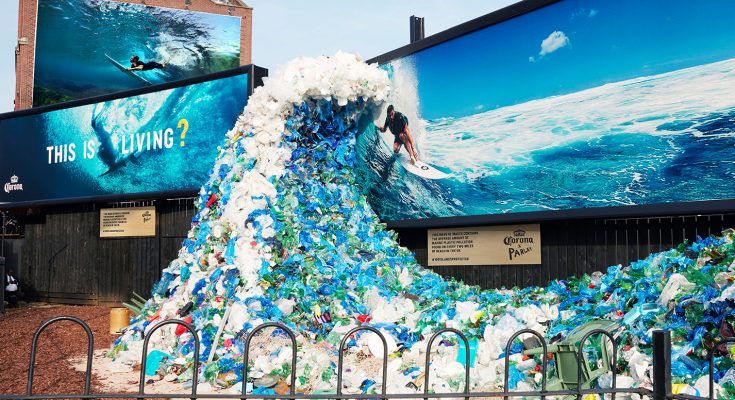 Mexican beer brand Corona and charity Parley for the Oceans are taking their partnership against marine plastic pollution to the global stage by hijacking iconic symbols of paradise for today’s World Oceans Day (June 8th 2018).

As part of the campaign, the partners have created a sculpture, The ‘Wave of Waste’, in Old Street, London, featuring Australian actor Chris Hemsworth (Marvel’s Thor) surfing in a wave of plastic collected in the UK.

Over the last few days, Londoners have been able to contribute to this installation by dropping off their own plastic waste at the site of the billboard.

Corona and Parley launched their partnership a year ago; the latest campaign sees Corona hijacking its own advertising and iconic visions of paradise, plus the classic Hawaiian shirt pattern, to reveal the impact of marine plastic pollution.

Corona is selling a new Hawaiian shirt on its website which features threads made from marine plastic pollution. The Parley Ocean Plastic is collected from the open ocean, remote islands, shorelines and coastal communities. The design subtly features everyday plastic items like toothbrushes and plastic bottles to represent the fact that the issue at a distance is hard to see, but pervasive up close. The limited-edition shirts are available in three colours and can be purchased at wslstore.com/corona for £53 ($70). Proceeds from each Corona Hawaiian shirt will go to Parley for the Oceans to help support its mission to protect our oceans.

Installations like the Old Street one will also be appearing in Melbourne, Santiago, Bogota, Santo Domingo and Lima, all made from plastic collected from local beaches. The London installation includes plastic collected by The Marine Conservation Society from Holywell beach, East Sussex.

“As a brand that is synonymous with the beach, we are seeing the destruction of shorelines and oceans up close,” says Felipe Ambra, Global VP of Corona. “Our ads usually showcase paradise the way we assume it to be, pristine and beautiful, but today it’s increasingly hard to find a beach without plastic. Through our work with Parley, we hope to reverse this trend. This World Oceans Day, Corona wants to remind the world that we all need to protect our beaches to continue enjoying them.”

Corona and Parley point out that roughly eight million metric tons of plastic waste are dumped into the ocean each year. To raise awareness of this fact, the brand is inserting plastic into other places it doesn’t belong. Corona is starting by twisting its own campaign tagline and imagery to show the unfortunate fate of paradise plagued by plastic pollution.

Last month, the partnership changed the name of the “Corona Bali Pro” World Surf League event to “Corona Bali Pro-tected”, to make the point that even the most remote and aspirational paradises around the world are suffering.

Corona and Parley are committed to protecting 100 islands around the world by 2020 (see 100IslandsProtected.com). Launched last year, the partnership is already working with local communities in the Maldives, Dominican Republic and Chile and will continue to scale up efforts in several more regions within the next year. Corona x Parley also announced a fundraising platform called Clean Waves in May that upcycles plastic pollution into fashion products for purchase, with all proceeds going to additional island protection.

Parley for the Oceans is a global network covering the creative industries, brands, governments and environmental groups aimed at protecting the oceans. The organization has formed alliances with major corporations including adidas, Anheuser Busch InBev (Corona), Intel and the United Nations.

Corona is the leading beer brand in the Mexico and the most popular Mexican beer worldwide, exported to more than 180 countries. The Corona brand is owned by Anheuser-Busch.