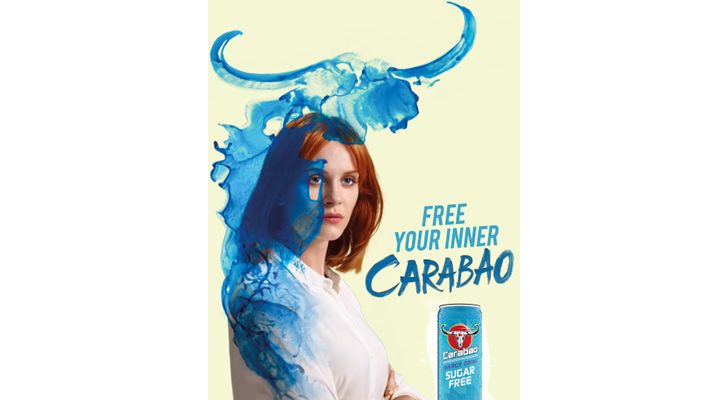 The campaign sees Carabao break away from the laddish positioning adopted by rival energy drinks inn favour of targeting a more unisex and even female audience.

The ‘Free Your Inner Carabao’ campaign creative features much softer, less male-oriented messaging. It will be run across multiple UK media channels from September 2016.

The Carabao is an Asian water buffalo revered for its physical power, stamina and fighting spirit. The concept behind the campaign is the idea that there is a ‘Carabao’ in all of us, and that Carabao Energy Drink can help consumers summon this inner strength.

Mads Perch, a Danish photographer who practices the construction of ‘real-time special-effects’ photography, has been commissioned to bring the campaign creative to life using an innovative ink effect that flows across perspex on a camera lens to reproduce the spirit and energy of Carabao.

The inclusive marketing strategy also sees Carabao undertake a series of high-profile partnerships. Carabao renewed its main sponsorship of Reading FC in June 2016 (it signed a year’s deal in 2015) and has also just signed as a principal commercial sponsor of Chelsea FC, as well as its official training-wear partner, for the next three seasons.

Carabao has also brokered a partnership with London Fashion Week, becoming the Official Energy Drink Partner for the annual event which starts on Thursday 15th September. Carabao-branded fridges full of the energy drink will be available for everyone involved with the event, including backstage teams, runway models, press and VIP guests in the audience. Carabao will also be present during presentations, parties and events outside of the central Brewer Street runway space, with Tuk Tuks offering lifts to the fashion crowd and also handing out samples of the product.

Launched 15 years ago in Thailand, where other energy drinks such as Red Bull have their origins, Carabao is currently available in two variants, Original and Sugar Free, with further flavours planned for launch later this year.

John Luck, Chief Marketing Officer, comments: “Our UK research demonstrates there is a huge community of time-poor and energy-starved consumers, men and women alike, that currently feel energy drinks are not relevant to them or their lifestyles. We intend to break the mould with our multi-million pound marketing campaign, and position Carabao as a more grown-up and accessible-to-all energy drink. Our marketing will communicate to a much broader, unisex audience, including consumer groups that are not traditionally associated with energy drinks, and show how our great-tasting premium product can help consumers to rise to their everyday challenges.”

Carabao’s media campaign is a mixture of outdoor (with nearly 1,800 roadside 6-sheets), digital, experiential and mobile and will includes ads across gaming, snacking, parenting, students and fitness sites. Carabao will also have a series of mobile banners and billboards.

The creative campaign was put together by agency Quiet Storm with PR and social media activity being handled by W Communications and Total Media managing media planning and buying.

Carabao was originally launched in Thailand in 2002 as Carabao Daeng, which means red buffalo. It was created by a company formed by a Thai rock star, Aed Carabao, still lead singer of Thai group Carabao, and a successful Thai entrepreneur, Sathien Setthasit. Carabao, the energy drink, is currently the second most popular brand in Thailand after M150, owned by Thai soft drinks company Osotspa.