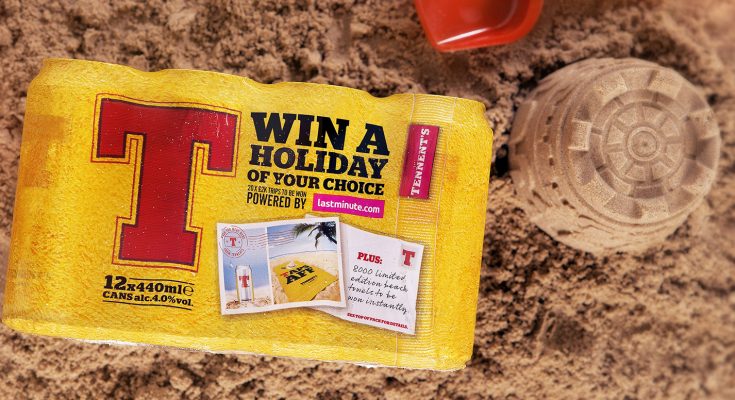 Tennent’s and lastminute.com in ‘Here to Serve’ on-pack promo

Tennent’s Lager is expanding its ‘Here to serve’ campaign with an on-pack competition offering consumers the chance to win one of 20 lastminute.com holidays worth £2,000 or one of 8,000 limited edition ‘banter branded’ beach towels.

The promotion officially runs from the beginning of June 2017 until the end of September, with a total potential prize pool worth £80,000.

A total of 700,000 packs in 10,12,15 and 20 pack SKUS have been wrapped with the on-pack promotion. All consumers need to do to find out if they are a winner is to enter the 12 digit code found on their can at the Tennent’s promotional website, win.tennents.com.

Promotional packs are available across all major retailers throughout Scotland and Northern Ireland. The promotion is open to any resident of the UK. Entry is via purchase of a promotional pack, except in Northern Ireland, where there is a ‘No Purchase Necessary’ route provided. This is because Northern Ireland never enacted the Gambling Act 2005, which allowed companies to require people to buy products to enter prize promotions. As a result, such promotions are officially banned.

Claire Arnott, head of UK customer marketing at Tennent’s, says: “Our new on-pack promotion is a great opportunity for the off-trade. We’ve got really strong prizes on offer and multiple chances to win, so desire to purchase will be high. It’s great to partner with lastminute.com to provide our customers with the chance to enjoy some real fun in the sun too. Tennent’s is Scotland’s favourite lager and we’re sure this competition will be a great sales driver for our customers.”

Consumers who do not win the first time around are being offered an opportunity to win an ultimate beach party at home by submitting an image of themselves with their new promotional pack to the Tennent’s Lager Facebook page.

The ‘Here to Serve’ campaign idea, created by agency Lucky Generals, was launched at the start of June 2017 with the aim of achieving a 65% reach for 18-24 year-old males in Scotland.

The first activation in the campaign centred around the Scotland vs England World Cup qualifier at Hampden Park in Glasgow on June 10. Tennent’s created a currency exchange point, a humorous reference to problems that Scots sometimes have when they try and use their Scottish banknotes in England and Wales. In a reversal, the exchange point, located in Glasgow’s St. Luke’s bar, offered to exchange English supporters’ cash for Scottish notes and was also handing out free pint vouchers which could be exchanged at Tennent’s pubs across the city.