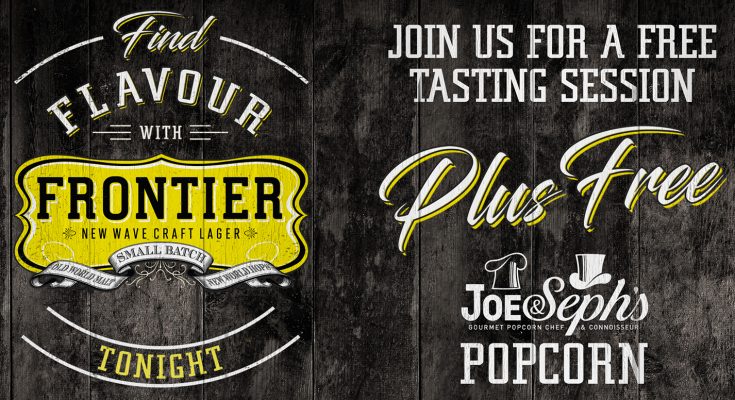 Frontier, the new craft lager from brewer Fuller’s, has teamed up with gourmet popcorn brand Joe & Seph’s for an in-pub food pairing campaign encouraging trial of Frontier through the offering of a free packet of Joe & Seph’s popcorn.

The ‘Find Flavour Sessions’, created by marketing agency ignis ltd, see a programme of in-pub events that demonstrate how the unorthodox flavours of Joe & Seph’s popcorn, such as Madras Curry, are perfectly balanced by Frontier’s fruity but refreshing notes. An on-pack mechanic invites consumers to take to social media and voice their opinion on which flavour best pairs with the craft lager.

Jane Jones, Marketing Director for Fuller’s, says: “Collaborating with an exceptional, independent company such as Joe & Seph’s is a fantastic step for Fuller’s, and allows us to showcase Frontier’s food-pairing potential in an extremely innovative way.”

As well as consumer engagement, the campaign also looks to re-connect with the trade. With bar staff identified as the key route to consumers, ignis has developed a 360° brand film to educate staff on the brewing process of Frontier and why the craft beer is so well suited to food pairing.

Nick Peters, Executive Creative Director of ignis, says: “With this campaign we really focussed on what makes the trade tick. We believe the possibility of 360° and VR goes beyond consumer engagement, and can be perfectly applied to training and development within an organisation. We felt 360° was the ideal medium in which to tell the Frontier brand story in an immersive way.”

Frontier Find Flavour Sessions will be launching in selected licensed venues in the coming months. Follow @FrontierLager for more information.

Fuller, Smith and Turner P.L.C. is an independent traditional family brewer founded in 1845 and is based at the historic Griffin Brewery in Chiswick, London, where brewing has taken place continuously since 1654. The Fuller’s Beer Company brews a portfolio of premium beers including London Pride, Oliver’s Island, ESB, Organic Honey Dew and Frontier Craft Lager. In June 2013, the Company acquired Cornish Orchards, a craft cider maker producing a range of award-winning ciders and premium soft drinks. Fuller’s is also the UK distributor for Sierra Nevada, the premier US craft beer.

ignis is a multi-award winning independent brand experience agency based in Fulham. Over a 29-year history, it has worked with a wide range of clients including Jameson Whiskey, Sheraton Hotels Fuller’s, Betfair and Cuticura.