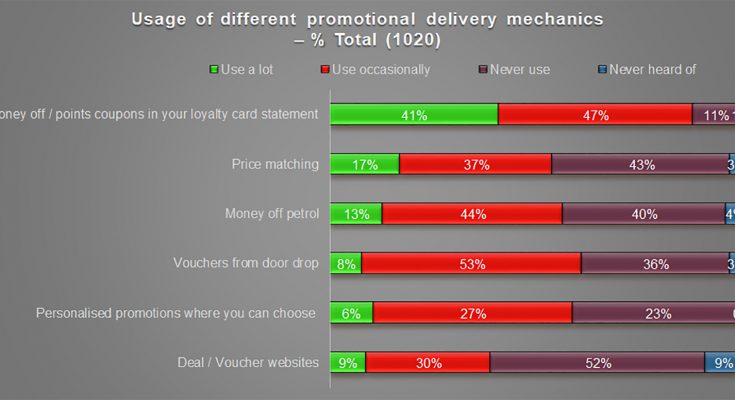 Independent shopper insights consultancy Shoppercentric has published its Shopper Stock Take Index for a third year, which reveals that 41% of consumers use store loyalty cards ‘a lot’ and 47% use them ‘occasionally’. Only 1% of survey respondents said they had never heard of loyalty cards.

However, Danielle Pinnington, Managing Director at Shoppercentric, warns: “Retailers and brands must keep a finger on the shopper pulse and appreciate that each customer is now using a range of strategies to cope with increasing pressures on household budgets. Which categories or sectors will suffer most this year is likely to depend on how they react to changing shopper needs.”

Pinnington adds: “With shoppers picking and choosing between stores for particular items based on their own experience of how well different retailers deliver, there is even greater pressure to differentiate and create memorable in-store experiences. Equally, avoiding or challenging misconceptions based on bad experiences has become more important. If, as our report shows, shoppers are actively widening their repertoires, loyalty as we used to know it is an outdated term.”

Shoppercentric collected more than a thousand online survey responses from shoppers, covering how they felt about the stability of their household budgets, how their shopping habits are changing, and what brands and retailers need to do as a result.

The 2018 Shopper Stock Take index reveals that while shoppers aren’t yet feeling the same pinch as in the worst of the recession, they are certainly starting to feel more pressure. Only one in four claims to be unaffected by the current economic situation, with a considerable proportion of UK shoppers having to make minor changes to spending.

The speed of change is rapid – just 12 months ago, the proportion of those making minor changes was just 16%, but today it stands at 44%. 26% of shoppers have noticed prices increasing a lot, and 56% have noticed small increases.

Shoppers primarily put these increases down to the state of the economy (54%) and Brexit (50%), although the exchange rate, cost of ingredients and greedy companies are also ‘blamed’ by a fair proportion of shoppers.

80% of shoppers are now “being careful to avoid waste”, while 75% are “avoiding being tempted to buy things I don’t need”. 50% are “going out of their way to find the best prices” and will “split shopping across different stores to get the best deals.” 60% are now buying “own label where I can to keep costs down” and 33% are now using “online shopping to check spending as I go.”

2017 saw a continued increase in the proportion of shoppers who had abandoned weekly main shops in favour of shopping little & often – rising from 11% to 16%. This year, however, there has been no change in that figure, suggesting this trend may have reached its ceiling.

Instead, shoppers are becoming more active as they make the most of the choice available. Shoppers’ average repertoire has changed to five stores or websites in the last fortnight, up from four in 2017. 26% of UK shoppers say that they fit their grocery shopping in where and when they can. 33% of shoppers switch stores based on what they need – to get the best places for what they want (versus 28% in 2017).

The biggest change in the five channels covered by the report was in the use of discounter stores – up 13% on 2017 figures to 57% of UK shoppers. Use of the Big Four supermarkets rose by four percentage points on 2017 figures to 83%. There was no significant change in convenience store or online grocery usage penetration – 49% and 30% of shoppers using those channels respectively.

With the exception of Smart TVs, all digital devices covered by this report saw increased usage by UK shoppers. Computers/laptops were cited as the most used touchpoint – up six percentage points on 2017 figures to 63%. In second place were smartphones with a huge 18 percentage point increase on last year to 45%.

Interestingly, despite a number of retailers and brands moving away from catalogues, usage by shoppers rose to 22%– up four percentage points on 2017.

There has been a seven percentage point increase to 58% in the number of shoppers that have been triggered to shop by content on their smartphone. Using a smartphone to carry out ‘research’ has remained on a par with last year at 61%. However, using the device to ‘find’ an item has risen from 56% to 60%, while the number of shoppers using smartphones to buy a product has gone up from 37% to 42% of shoppers.

However, despite the considerable shift in shoppers using their smartphones as they shop, particularly in relation to actual purchasing, there has been no increase in the uptake of mobile-based promotions, which remains at 20%.