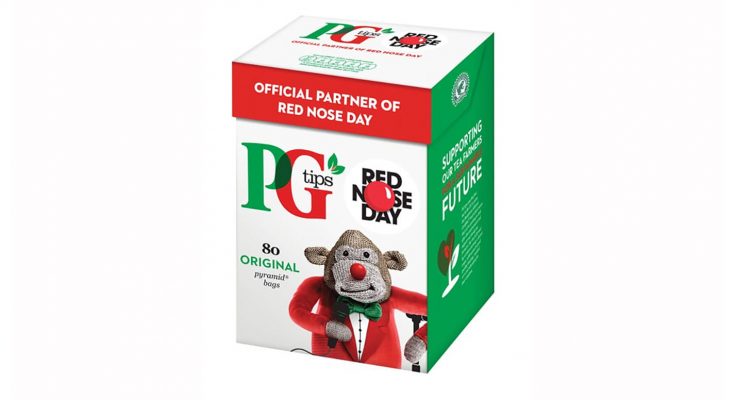 The brand has launched a #1MillionLaughs campaign to get the public sharing jokes across social media using the hashtag, and has committed to donating £300,000 to this year’s Red Nose Day, which takes place on 24th March 2017. It will be making a donation for every promotional pack sold, plus encouraging PG tips fans to give more.

The #1MillionLaughs campaign will be supported by out-of-home activity and social media support, including sponsored posts on Facebook and Twitter, a new Snapchat filter and a ChatBot.

The PG tips ChatBot is an online tool which will allow consumers to message the PG tips Monkey brand character directly via @MostFamousMonkey on Facebook Messenger and get jokes back. The ChatBot will also encourage users to donate via the app or ask questions about the charity and what the money is used for.

Fiachra Moloney, PG tips marketing manager at Unilever UK and Ireland, says: “We are thrilled to be supporting Comic Relief through our #1MillionLaughs campaign. We know that UK consumers are passionate about getting behind Red Nose Day and this activity is designed to do just that in a fun and engaging way. The unique ChatBot will give fans the chance to get their own daily dose of Red Nose Day as they receive jokes from Monkey himself.”

Monkey, the brand character who fronts PG Tips’ advertising and marketing, is actually owned by Comic Relief and used by PG Tips under license. Comic Relief has the rights to Monkey as the result of a legal settlement over ownership of the character between the receivers of ITV Digital, the digital pay TV channel which shut in March 2002.

Monkey was created by advertising agency Mother and made by Jim Henson’s Creature Shop (responsible for The Muppets) for ITV Digital’s advertising campaign, which also featured his partner Al (still played today by comedian Johnny Vegas).

Monkey was one of the channel’s few valuable assets, and became the subject of a year-long legal battle which was ended in February 2003 when both parties (Mother and the receivers) agreed to sign over rights to Comic Relief. The character then made a couple of appearances on TV and was the lead character in an as yet un-aired BBC variety show before being reunited with Johnny Vegas in a TV ad for PG Tips in 2007.