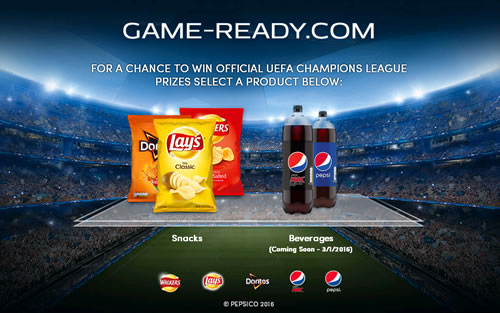 PepsiCo has relaunched its #gameready UEFA Champions League promotion across its soft drinks and savoury snacks portfolio, offering football fans the chance to win hourly prizes of UEFA related merchandise plus entry to a draw to win tickets to the UEFA quarter final, semi final and final matches and a grand prize of a VIP trip for two to the Final in Milan.

The on-pack promotion is capitalising on PepsiCo’s sponsorship of the UEFA Champions and will give the brands high visibility with football fans in advance of the start of the Euro 2016 tournament in France on June 10. The UEFA Champions League Final takes place on May 28.

One entrant will win the grand prize package, including travel to Milan for two people, a tour of the city, lunch, evening drinks reception and a shopping trip, plus tickets to the final.

Consumers can enter up to 24 times a day, but have to have a different unique code from a promotional pack each time they enter. Entry is via the promotional website, www.game-ready.com.

The promotion is currently running in the UK, Republic of Ireland and Germany on PepsiCo’s Walker’s Lay’s and Doritos products. From March 1 2016, it will be rolling out to another 12 European countries and will also be appearing on-pack across Pepsi and Pepsi Max  products.

PepsiCo first ran a #gameready between September 12 2015 and November 12 2015. That campaign was supposedly the first to be run simultaneously by PepsiCo across its European markets on both food and beverage brands.

Thomas Barkholt, Marketing Director at Walkers, says: “We’re thrilled to be launching our latest #Gameready promotional campaign in conjunction with our UEFA Champions League sponsorship. This football tournament is renowned as one of the most anticipated competitions in the sporting calendar and we’re delighted to be offering match tickets to football fans across Europe, including an exclusive VIP trip to the final – the world’s biggest annual sporting event!”