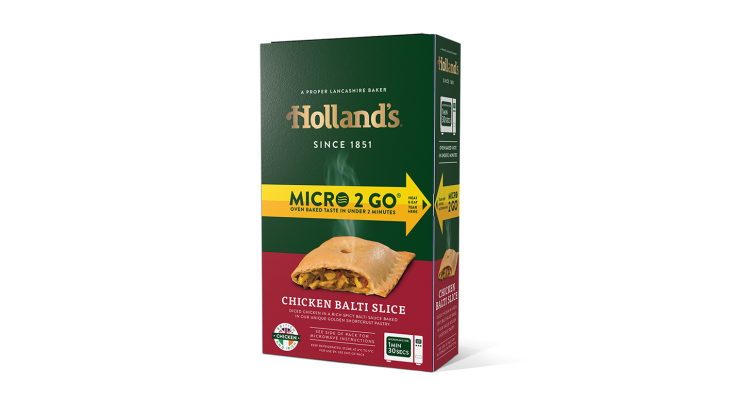 Lancashire-based bakery Holland’s Pies is offering businesses, community groups and households across the North West of England the chance to win a ‘canteen kit out’ as it continues to promote its Micro 2 Go slice range.

The ‘Hunger Busters’ competition was launched after research conducted by the bakery company revealed that just 38% of locals take a regular lunchbreak. With many respondents claiming they didn’t have the time or facilities to enjoy a proper lunch, Holland’s says it is coming to the rescue with its “super speedy slices that offer a fast and flavoursome snack that can be microwaved in just 90 seconds”. The prize consists of a fridge, a microwave and a supply of Holland’s brand new Micro 2 Go slices.

Targeting key sales areas for the new slice range, Holland’s hopes that the Hunger Busters competition hopes to increase engagement within the baker’s loyal fan base, raise awareness of the new line and attract new customers to the brand. As the latest installment in the Micro 2 Go launch campaign, the activity follows a dedicated outreach programme that has also included blogger reviews, social media content, student sampling and media microwave drops.

Leanne Holcroft, Brand Manager at Holland’s Pies, says: “We were shocked to see so many people going without their lunch break during the working day, especially for reasons such as time, hassle and a lack of facilities. Given the unique selling points of our Micro 2 Go slices, the Hunger Busters competition will provide a great way to help tackle this issue whilst celebrating our product and giving back to a community that has supported us for 166 years. We’ve already enjoyed some great feedback from our initial launch and we look forward to building on this further with the Hunger Busters contest.”

Organisations, businesses and households wanting to enter the competition for the Canteen Kit Out can do so via Holland’s Facebook page (@HollandsPiesOfficial) or blog, where full terms and conditions are available. Holland’s says judges will be looking for personality, originality and strength of case within the winning entry with a shortlist being put to the public vote in February this year.

Holland’s started life as a baker’s shop in Lancashire in 1851.  Today, the company prepares and bakes over 1.2 million pies every week. It employs over 300 people at its Lancashire base and is part of 2 Sisters Food Group.  The company enjoys over 80% share of the market in the North West, an area where over 98% of people have heard of Holland’s Pies.