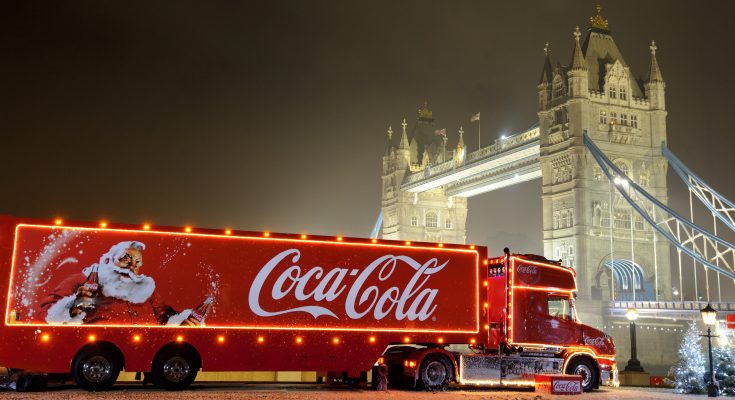 Coca-Cola UK has announced that its Coca-Cola Christmas truck tour will kick off for 2017 in Glasgow on November 11th and will visit 42 stops nationwide during the festive season, before making its final appearance at Lakeside, Essex, on December 17th.

This year, visitors will be able to snap and project their festive selfies across the side of the truck while enjoying a 150ml can of Coca-Cola Zero Sugar, Diet Coke or Coca-Cola Classic in a winter wonderland setting.

For those visiting as the sun sets, the truck comes to life with a special animation celebrating the magic Coca-Cola brings to Christmas. Every truck stop will also include a recycling call-to-action, encouraging consumers to recycle bottles and cans in line with Coca-Cola’s recent ‘Love Story’ recycling advert.

Over the last seven years, the truck tour has attracted thousands of consumers generating over 50,000 festive photos. It has travelled over 730,000 miles – the equivalent of 29 times around the world – twinkling its 8,772 fairy lights and playing the iconic ‘Holidays are Coming’ jingle.

Coca-Cola’s ‘Holidays Are Coming’ advert will return to UK screens, 22 years since first being aired. The first air takes place on November 17th with a special Christmas twist on Channel 4.

Aedamar Howlett, marketing director for Coca-Cola Great Britain, says: “Coca-Cola is synonymous with the Christmas season and it’s no secret that our much-loved Christmas Truck Tour marks the unofficial countdown to Christmas. We can’t wait to start spreading holiday cheer and we are excited to announce a brand new route for 2017 – which brings a sprinkling of festive magic to fans across the UK.”

Full details of the Coca-Cola Christmas truck tour are available at www.cocacola.co.uk/coca-cola/trucktour-2017/. Consumers are being encouraged to get involved on Twitter using the #HolidaysAreComing emoji throughout December or by sharing a picture on Snapchat or Instagram, using the Coca-Cola festive filters.

Coca-Cola will also be collaborating with Capital FM for its 9th annual Jingle Bell Ball, where an estimated 32,000 attendees will receive a sample of Coca-Cola Zero Sugar.