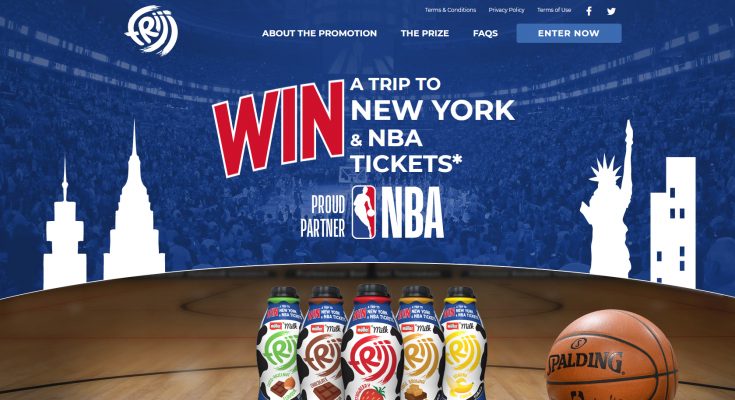 Dairy company Müller has expanded its partnership with the US National Basketball Association (NBA) to offer consumers the chance to win a trip to New York for themselves and three guests, including tickets to an NBA game via two on-pack promotions across Müller Rice packs and Frijj bottles.

The activity is part of the marketing push for the NBA London game on January 11th 2018.

In addition to the New York star prize, consumers will get redeemable on-pack codes to claim an NBA-branded mini hoop and basketball. Müller will also run an NBA-themed multimedia campaign in the lead up to the game.

Consumers will also have the chance to win four tickets to the NBA London game through promotions hosted on Müller Rice and Frijj social media channels. Taking place at The O2 on January 11th 2018, the Philadelphia 76ers will take on the Boston Celtics in the NBA’s eighth regular-season game in London.

Müller chief marketing officer Michael Inpong says: “Last year thousands of Müller Rice consumers collected their mini hoop and basketball, and we are really excited to bring further inspiration to the category with our on-pack Frijj and Müller Rice promotions.”

The Frij promotion is live and runs until February 28th 2018. The Muller Rice promotion goes live on November 11th.

After purchasing a promotional pack consumers must visit the relevant promotional site and enter the unique code from the packaging, together with their full name, address (including postcode if applicable), valid email address and telephone number.

All valid entries received will be entered into the prize draw to win the trip to New York and NBA game tickets, which will take place on March 2nd 2018. The prize includes return economy flights from a UK airport to New York, USA, transfers, four nights hotel accommodation, £200 travel allowance and insurance.