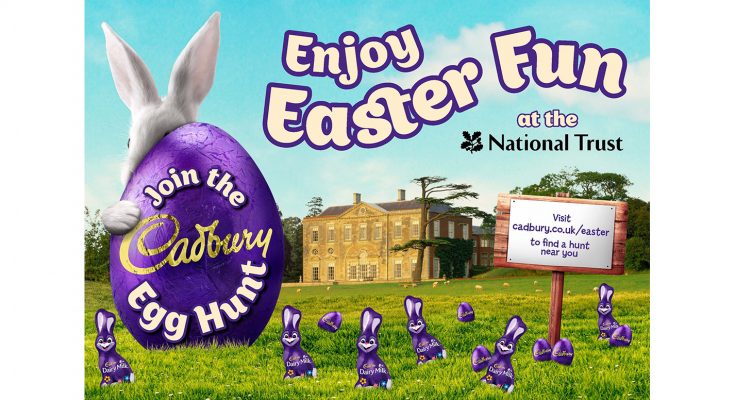 The activation was put together for Cadbury by independent creative agency, RPM.

Building on the natural association between the brand and the Easter holiday, the activation is designed to encourage direct participation from families across the UK, with the ultimate aim of establishing Cadbury as ‘THE Easter Treat’.  The partnership plays a key role in cementing the idea of Cadbury as owners of the Easter egg hunt into the minds of the British consumer.

Participating families are invited to join the egg hunts at National Trust and National Trust for Scotland properties across England, Scotland, Wales and Northern Ireland. For the 10th year running, Cadbury will be providing properties with the support to activate their own personalised egg hunt themes, linking back to each of the properties unique stories. Themes range from knights tracking down dragon eggs to a 1950s vintage-style Easter egg hunt, all leading to a Cadbury treat as a reward at the end. All money raised goes back into conserving the locations.

RPM has created and is leading on all experiential elements of the campaign. This includes roll-out of the successful 2016 strategy and creative concepts. The agency is also managing the National Trust partnership, kit and signage production, staffing and logistics.

Hortense Foult-Rothenburger, Senior Brand Manager – Easter at Cadbury, says: “We know how important Cadbury is at Easter and this year, we want to take it to the next level by bringing a smile to the whole nation with Cadbury’s Great British Egg Hunt – a season of celebrations where Cadbury Easter bunny will bring families together around the fun ritual of egg hunts. We are very excited to partner with National Trust and National Trust for Scotland again and, with RPM’s great support, to organise more than 300 Cadbury egg hunts across the UK. We expect 100,000s of families to take part.”

Laura Keates, Business Director RPM/ Mondelēz, comments: “We are really excited about Easter 2017. This year is very much about building on the incredibly successful year we had in 2016, where we had over one million people engage with the Easter Egg Hunt campaign though National Trust properties. We are working closely with Cadbury, the National Trust and National Trust for Scotland for the fourth year to deliver best in class activation, which will be live across the UK for 1,104 days over the Easter weekend period.”

Mondelēz International is a world leader in biscuits, chocolate, gum, candy and powdered beverages, with 2016 net revenues of approximately $26 billion. It owns global ‘Power Brands’ such as Oreo and belVita biscuits; Cadbury Dairy Milk and Milka chocolate; and Trident gum.

RPM is an independent creative agency, with brand engagement at its core, which aims to deliver purposeful brand experiences that change consumer and shopper behaviour. Clients include Diageo, Mondelēz, Heineken and Sky.