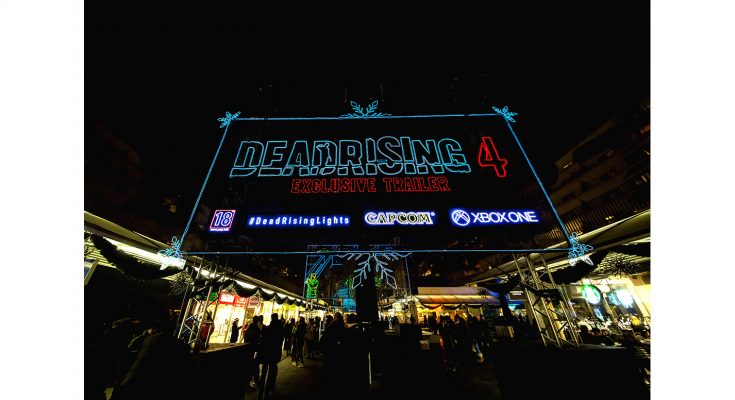 Xbox has installed a series of Christmas lights that form the first-ever game trailer consumers can actually walk through. The lights – installed in the shopping plaza in London’s Brunswick Centre – don’t feature traditional festive imagery. Instead, they tell a story about hordes of flesh-eating zombies, to promote the new Christmas-themed zombie game Dead Rising 4.

The game was developed by Capcom and published in partnership with Microsoft. It launched on Xbox One and Windows 10 PC on December 6th 2016.

The night before the official launch, the game’s online fan-base worked together to switch on the lights. By interacting with a cryptic Facebook Live stream of a zombie hand suspended above a button, Xbox followers moved the hand downward to press the switch and turn on the display, revealing the trailer to the world.

Created by advertising agency McCann London, the Dead Rising Lights consist of nine panels of lights, suspended consecutively above a busy shopping plaza. The lights switch on and off in sequence to reveal a brand new narrative to gamers. As with all Xbox game trailers, it begins with the PEGI age rating logo and concludes with the iconic green Xbox end-frame.

The direct-response switch-on mechanism was part of a fully-integrated campaign revolving around the light installation, comprising:

Adrian Simons, Director of Global Windows and Devices at Microsoft, says: “Most Christmas lights are switched on by celebrities, but in this case the honour went to Xbox’s global fan-base. And they are not just any lights, they bring to life a new form of game trailer which we believe is a world first. This is a fun, bold and innovative undertaking in keeping with our commitment to our fans – and it’s all done in the true spirit of the game.”

Laurence Thomson, Chief Creative Officer at McCann London, adds: “We wanted to reinvent the game trailer to connect with today’s gamers. What better way to celebrate the festive season and the launch of Dead Rising 4 than a gory Zombie apocalypse lit up in glorious technicolor? By subverting the traditional Christmas light display, we’re kicking the schmaltzy Christmas advert out of the window and instead appealing to gamers’ tongue-in-cheek attitude.”