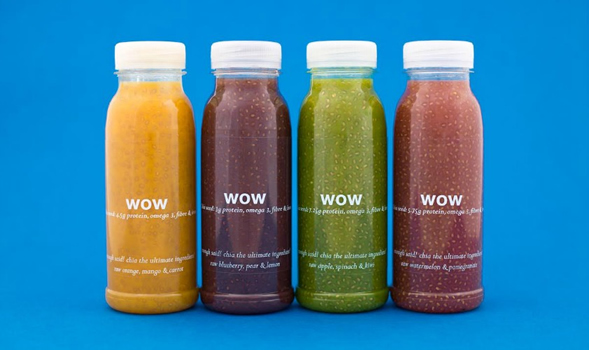 Europe’s “first chia seed based drink”, wow, has appointed Diffusion as its retained agency to handle its launch in the UK, following a competitive pitch.

wow is made by cold-pressing fruit and vegetables and adding hydrated chia seeds. As a ‘superfood’, chia seeds are supposed to help hydrate the body, boost metabolism and activate glycogen, which burns fat and provides a feeling of fullness, according to the brand.

Diffusion has been chosen to build brand awareness for wow with a content-driven campaign. The team will develop and implement an integrated campaign to convey wow’s “Made Amazing” proposition.

Working alongside the brand’s internal marketing and comms team, Diffusion will create a series of consumer activations, provide a press office function, and run events as well as experiential, blogger, vlogger and influencer engagement programmes to “inspire and excite” the brand’s target audience.

Oliver Dickinson, co-founder of Wow Food & Drinks, the company behind wow, said: “As the first offering of its kind in Europe, we needed an agency with a fresh and creative approach to build awareness for wow and capture the imagination our target audience. The Diffusion team has strong experience in the food and drink category and with new FMCG product launches.”

Remy Le Fèvre, head of consumer at Diffusion, added: “As the first chia seed based drink in the UK, we’re really excited to introduce wow to consumers and the industry. It’s no secret that the UK drinks market is hugely competitive which is why it’s essential for brands such as wow to build meaningful and authentic relationships with consumers. Diffusion’s campaign will draw on our experience working with challenger brands in the food and drink space, and our extensive network of media and influencers.”