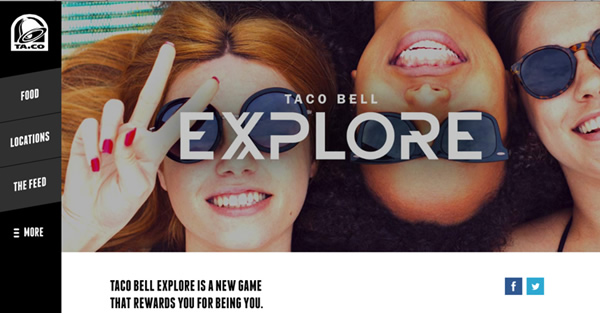 The game is part of the Taco Bell loyalty app, which has already been downloaded more than 4.7 million times since it was launched in October 2014.

The Explore game will reward people for using the app for all the normal restaurant-related actions, such as ordering online. However, in a departure from other loyalty programs, it will also reward people for posting various ‘Live Mas’ experiences on social media platforms such as Facebook, Twitter and Instagram, even if they have nothing to do with Taco Bell.

‘Live Mas’ is not a reference to Christmas; the brand introduced the slogan at the start of 2012, and ‘más’ is a Spanish word which can be translated as more, plus or most. Taco Bell says it means living life to the full.

The Explore game features an algorithm which recognises certain words in users’ social media posts that suggest that that person is ‘Living Mas’ – so someone who posts about enjoying nature or watching the sun set over the ocean may get rewarded with a surprise puzzle piece. The company will not reveal exactly what actions will trigger rewards aside from the obvious ones relating to buying Taco Bell products.

By sharing photos and personal details on social media sites, Taco Bell fans can unlock pieces of puzzles. They also get more puzzle pieces if they order using the app. If they complete the first and easiest puzzle, they are rewarded with a free Freeze drink. Subsequent puzzles can earn them higher rewards such as gift cards worth up to $100, the opportunity to reserve a booth at a Taco Bell restaurant or a free trip to Taco Bell’s California headquarters.

A leaderboard shows users how they are doing in the game and also how their friends are doing.

In a soft launch period before its official release, While she declined to share details on usage of the app overall, more than 60,000 used Explore with  up to 40% of them allowing Taco Bell access to their social networks.

As of last week, Taco Bell has started to promote the game through digital channels such as Facebook, Instagram, Snapchat and its own site.

The app and the Explore program were created for Taco Bell by DigitasLBi. The mobile reward delivery system was put together by specialist agency Kiip while Cardfree worked on app development and integrating the Explore game into the app.

Taco Bell has said that the current version of Explore is ‘season 1’ and is purely mobile related: the company has hinted that ‘season 2’, planned for launch in 2016, will expand the program outside mobile.