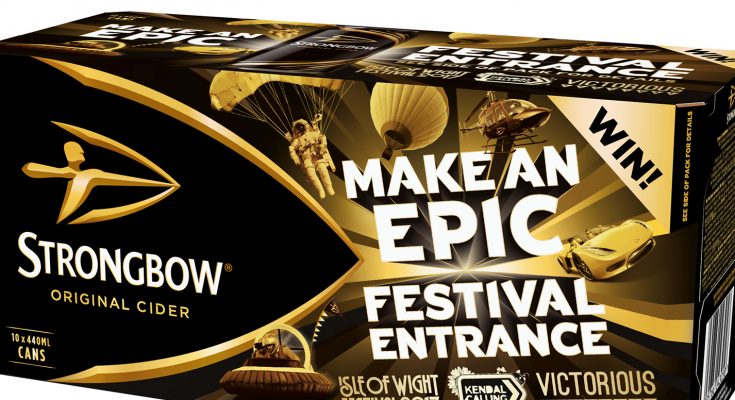 Heineken cider brand Strongbow is offering the chance to win a ‘Make an Epic Festival Entrance’ prize package worth up to £10,000, including entrance to the selected festival for six people plus tents for accomodation.

The challenge is to come up with an imaginative way to arrive at any of the three UK festivals Strongbow is sponsoring this year — Isle of Wight, Kendal Calling and Victorious.

There are also thousands of festival-themed prizes to be won, including tents, sleeping bags, Bluetooth speakers, Pac a Macs and phone chargers.

To enter, consumers have to buy a promotional pack, then go to the website uk.strongbow.com/epicentrance/ and input the batch code from the packaging and their contact details. They then need to select: how they want to arrive at the festival (choosing from a menu of options including hovercraft, helicopter, parachute, and police car, or coming up with their own idea); how they want to be dressed (again choosing from a pre-populated list including options such as cowboy, astronaut, alien, mermaid, pirate and pumpkin – or their own suggestion); and what kind of entourage they want (bodyguards, dancers, stilt-walkers, sumo wrestlers and the like).

They then have to say in a maximum of 50 words what they would consider to be an epic festival entrance.

A draw will select 200 entries each for Kendal Calling and Victorious. A judging panel consisting of representatives of Strongbow, Initials (the agency which has created the promotion for Heineken), and the festivals will select three winners for each of these two festivals using the following criteria:

Kendal Calling takes place from July 27-30 while Victorious takes place August 25-27. The promotion actually launched in April, and two winners for the Isle of Wight festival (which takes place this weekend) have already been selected randomly.

The promotion is featured across 10-pack cans in Original, Dark Fruit and Cloudy Apple varieties, as well as across 12-pack cans and 20-pack cans in Strongbow Original.

Toby Lancaster, category and shopper marketing director at Heineken, says: “Cut-through on-pack promotions such as this give retailers the opportunity to drive excitement in the category and encourage shoppers to make the most of the summer events.”

‘Epic Festival Entrance’ winners and guests who are over 25 years of age and look over 25 years of age will be required to participate in publicity. The age specification is to comply with the CAP Code, the rules governing advertising and marketing in the UK, which ban people who are or who look under 25 from appearing in marketing communications which the brand controls.