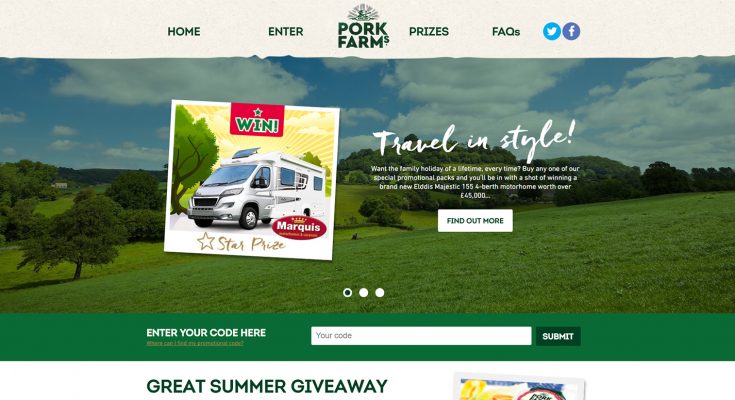 Pork pie brand Pork Farms has launched a three month on-pack promotion called “The Great Summer Giveaway” which will include the chance to win a £45,000 motor-home or one of more than 100 Haven holiday vouchers worth £500.

This is the company’s biggest-ever on-pack promotion and will run across millions of its products. Consumers will also get a voucher worth up to £50 off a Haven Holiday every time they buy a promotional pack.

A supporting TV advertising campaign will go live this summer.

Michael Holton, brand and marketing manager at Pork Farms, said: “The on-pack promotion is offering an estimated value of £10m of prizes to give away and this combined with the advertising, social and PR support should create a major buzz during a key trading period in the category. We are all really excited about the campaign and the potential impact on sales.”

Promotional packs went on sale at the beginning of June and the promotional period ends on November 30 2017. To enter, consumers need to buy a promotional pack, enter the unique code found on the pack at the promotional website, www.winwithporkfarms.co.uk,  and provide their details. They will then be told instantly if they have won one of the 112 £500 Haven holiday prizes on offer; they will also be sent an online code to use to claim up to £50 off a Haven holiday. All entrants will be entered into a prize draw for the Elddis Majestic 155 motorhome which will be held after the end of the promotional period.

Pork Farms has also again partnered with the body behind Britain’s Micropub movement, the Micropub Association, for the Pork Farms Board Games Championships. First run a year ago, this contest sees consumers challenged to host their own board games evenings at home and submit photos or videos to be in with the chance to go on to win a year’s supply of Pork Farm’s pork pies.

Pork Farms hosted a round of heats at Micropubs across the UK to find entrants for a final round which will take place at One Inn The Wood in Kent on June 24 during National Board Games Week 2017. The eventual winner will receive a package of board games plus vouchers for a year’s supply of Pork Farms products.