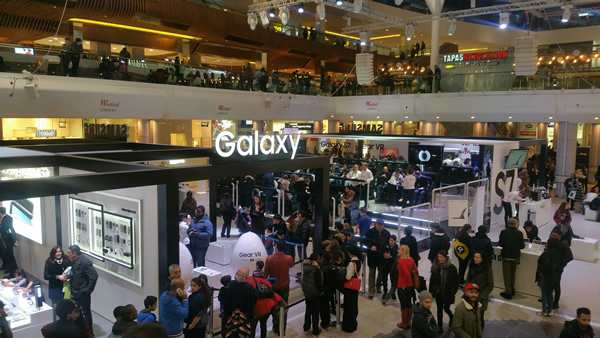 The interactive experience, created for Samsung by advertising and experiential agency Cheil UK, saw Samsung take over The Atrium of the iconic shopping centre to give customers the chance to get hands on with Samsung’s latest innovative products, including its new Galaxy S7 phones, the Gear 360 camera, Gear VR headset and Samsung’s return to Windows computing, the TabPro S.

The installation is split across a number of immersive zones, including a Virtual Reality theatre compete with vibrating seats which allows people to experience skiing, ski-jumping or a VR rollercoaster.

On arrival at the studio, customers are handed a unique mission card which allows them to collect stamps in ‘the cube,’ an interactive zone where they can get hands-on with the S7 and S7 edge, Gear 360, Gear VR, Gear S2 and TabPro S. Once customers have collected all their stamps, they can trade their card in for entry to the VR Theatre; they are then automatically entered into a daily prize draw, with a chance of winning a Gear VR headset from Monday to Friday and an S7 on weekends.

Conor Pierce, Vice President of IT & Mobile, Samsung UK and Ireland, says: “There has been phenomenal interest and demand for the Galaxy S7 and S7 edge since we launched both devices and we are delighted to be at Westfield London, introducing our latest technologies to customers and showcasing the power of immersive experiences.”

Myf Ryan, Chief Marketing Officer, Westfield UK & Europe, adds: “Technology is at the forefront of today’s retail experience and as it evolves, so too does the environment we shop in and the experience the customer seeks. A recent report launched by Westfield, How We Shop Now: What’s Next, predicts that 51% of Londoners would like to use new technologies, such as virtual reality headsets, with 39% wanting enhanced assistance to transport them to a virtual setting to better understand a product. Samsung’s Galaxy Studio space takes the virtual reality trip to the next level, and the sheer volume of Westfield shoppers who have already taken part shows the appetite for this type of immersive experience in showcasing a new product. We are delighted to be able to host this thrilling experience at Westfield London and have no doubt they will involve hundreds of thousands of visitors throughout the run of the event.”

The Galaxy Studio is open until April 10th 2016 at The Atrium, Westfield White City.