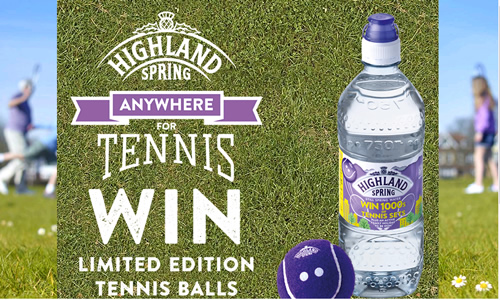 Highland Spring is running a £3m ‘Anywhere for Tennis’ campaign, including a TV ad and an on-pack promotion giving consumers the chance to win thousands of tennis sets plus an active holiday.

Karen Crowley, head of consumer marketing at Highland Spring Group, says: “Following the success of last year’s ‘Everyone for Tennis’ campaign, we’re determined to help even more families get active and spend time together, while adopting healthier hydration habits. We’re hoping the campaign can showcase how tennis can be played by anyone, any age, anywhere and at any time.”

To enter, consumers have to buy a promotional bottle of Highland Spring water, then go to www.anywherefortennis.com and enter their full name, email address and unique code from the bottle. If they have won, they will be notified immediately.

In total there are 15,686 Tennis Sets to be won, consisting of two 21” tennis rackets, one head case and three tennis balls, in the instant win element of the promotion. Everyone who enters a code online will also be asked if they want to enter a prize draw to win £750 in activity holiday vouchers, which is open until December.