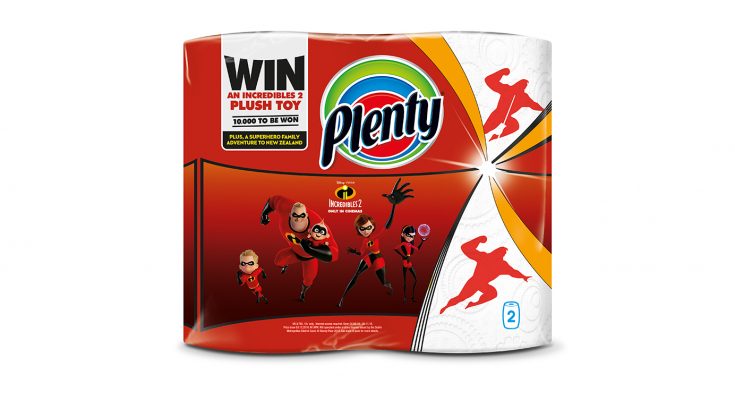 Household towel brand Plenty is collaborating with Disney ahead of the hotly-anticipated launch of the Disney∙Pixar film Incredibles 2, which will be released in UK cinemas on July 13th.

Manchester-based marketing agency Blue Chip has created an on-pack promotion for Plenty which runs across two million Plenty ‘The Stylish One ‘packs. The activity aims to recruit younger families into the category by offering the chance to instantly win one of 10,000 Incredibles 2 plush toys. Plus there is a prize draw to win an adventure holiday for a family of five to visit Queenstown, New Zealand.

To enter, consumers must visit www.plentywins.co.uk/incredibles2 and provide their full name, contact telephone number and a genuine email address along with the unique code found on the inside of every promotional pack. There are 10,000 Disney∙Pixar Incredibles 2 plush toys to be won instantly online. The toys are around 7 inches tall and represent the main characters of the Incredibles 2 film – Bob Parr (Mr Incredible), Helen Parr (Elastigirl), and their children Dash, Violet and Jack Jack.

Winner selection is via ‘winning moments’.

In addition to the instant win, everyone who enters their unique code online at the microsite, whether they have won a toy or not, will be put into a random prize draw to win a holiday to Queenstown, New Zealand for a family of five.

There is a No Purchase Necessary entry route for Northern Ireland. In the Republic of Ireland, where the law requires that brands operating prize draws where consumers have to buy a product to enter must partner with a charity which has been granted a lottery license, Plenty is working with LauraLynn Children’s Hospice.

The promotion went live this week and will be supported with a full media campaign including TV, social and in-store throughout the summer months.

Jess Harper, Account Director at Blue Chip, says: “This promotion will really inject some fun and excitement into the Household Towel category, not only by adding value with every pack, but also through recruiting younger families into the category and ultimately driving incremental volume.”

The release of the Incredibles 2 film sees Helen (voiced by Holly Hunter) being called on to help bring Supers back, while Bob (voice of Craig T. Nelson) navigates the day-to-day heroics of “normal” life at home. Meanwhile, a new villain hatches a brilliant and dangerous plot that only the Incredibles, working together, can overcome.

Consumers can enter on the microsite until 30th November 2018. All valid entrants will be submitted into the prize draw for the holiday prize, the winner of which will be drawn on 3rd December 2018.

The Plenty brand is owned by Essity, formerly part of SCA, the giant Swedish paper products group. Other Essity brands include Cushelle paper towels and the TENA range of personal hygiene products.