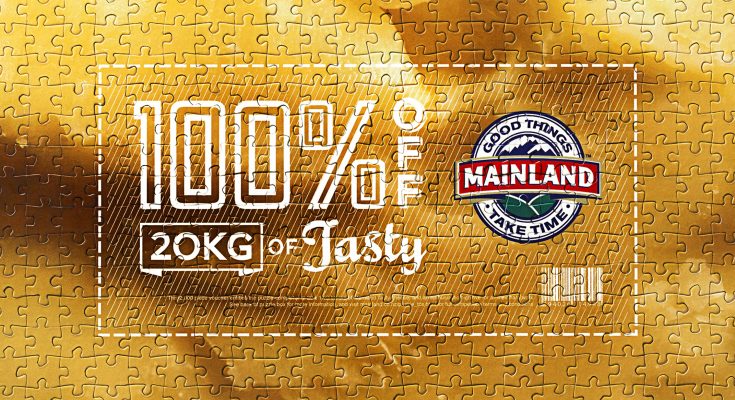 To underscore the brand’s long-running slogan, ‘Good Things Take Time’, its agency, Auckland-based Colenso BBDO, created a deliberately time-consuming challenge. The Mainland 2,000-Piece Voucher consisted of a jigsaw puzzle which, when completed, would entitle the consumer to 20kg of free Mainland Tasty Cheese or 50 packs of Mainland Brie or Blue cheese. Which prize consumers got depended on which of three versions of the puzzle they received.

The promotion kicked off on Facebook at the beginning of December 2017, with consumers invited to apply for a draw for one of 15 of the jigsaws by posting to Mainland’s Facebook page saying who they’d most like to complete it with.

The 15 people who won a jigsaw then had until January 28th, 2018 to complete it, take a picture of themselves with it (clearly showing no pieces missing) and send it in via the Mainland Facebook page.

Mainland Group Marketing Manager Margaret O’Sullivan says: “‘Good things take time’ is such a strong part of our brand DNA, so we’re thrilled to be able to execute it in such a brilliantly simple way.”

Mainland and Colenso BBDO say that the consumers who got the puzzles spent hundreds of hours on them – the fastest completion time was apparently 45 hours.

A video of the promotion is available on Vimeo.

Mainland is owned by New Zealand dairy collective Fonterra, which makes around 30% of the world’s cheese.