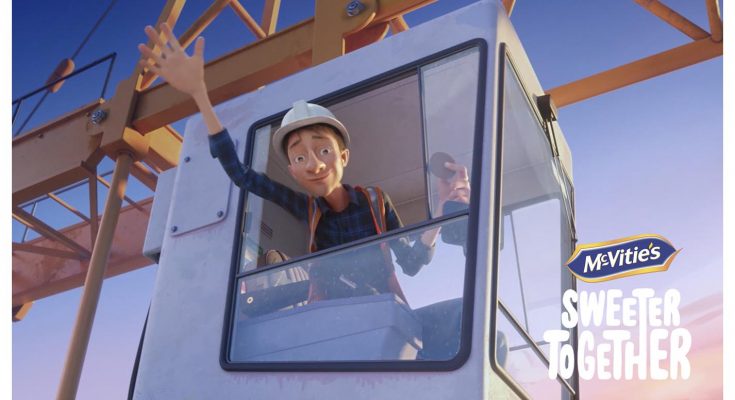 pladis-owned snacks brand McVitie’s has launched a brand-new Masterbrand campaign, ‘Sweeter Together’. The campaign explores the importance of real human connections and shows how the simple act of sharing a biscuit has the power to bring people together.

The £9.7m campaign launches with a TV ad campaign bringing to life the significant role the humble biscuit plays in everyday lives. A second ad will air later this year. Social and in-store activity will also feature as part of this integrated campaign.

As part of the launch, a major in-store promotion will be running across all McVitie’s Biscuits. Consumers will have the opportunity to win prizes including dream family holidays, weekend breaks and family days out. To enter, shoppers must buy any packet of McVitie’s biscuits and text ‘SWEETERTOGETHER’ to 66644 to find out if they have won.

The 60-second animated TV ad, titled ‘Crane’, shows a tower crane operator going about his work dozens of metres above the ground. Below him, he can see his colleagues enjoying the camaraderie of a tea break, complete with McVitie’s biscuits. He waves but is not seen.

As the day wears on, the operator becomes gloomy, craving some company – even if it’s only from passing birds. When he is convinced that everyone’s forgotten about him he gets a surprise: the latest steel beam he lifts has been loaded with a cup of tea and some McVitie’s biscuits. He looks down and sees his colleagues waving and smiling at him and his mood instantly lifts.

The ad ends with a simple message: “Sometimes the little things are actually the really big things”.

Sarah Heynen, Vice President of Marketing at pladis UK & Ireland, the global snacking company behind McVitie’s, said: “We know that despite being more connected than ever before digitally, we’re drifting further away from those real human connections that can mean the most. That’s why we’re so excited about our new ‘Sweeter Together’ campaign; because it has a very real message about the importance of togetherness. And we truly believe McVitie’s enables these moments every day.”

A second TV ad, ‘Brows’, will air later this year as part of the Sweeter Together campaign, telling the tale of a woman feeling nervous during her first day in a new job. Her sense of isolation disappears, however, when a new colleague breaks the ice with a joke and a packet of McVitie’s Jaffa Cakes is shared around.

The campaign has also been extended to convenience retailers, offering them a chance to win £1000. Retailers must first request a ‘Win Big Together’ POS kit from betterbiscuits@pladisglobal.com. They must then build a high-impact display that makes buying easy for shoppers and send images of the display back with a chance to win. In wholesale depots, the campaign will be executed through high impact displays and point of sale driven by the Field Sales team at pladis.

Pladis was established in January 2016 after Turkish conglomerate Yıldız Holding merged food companies United Biscuits, Ulker, Godiva Chocolatier and DeMet’s Candy Company into one global business. pladis is now one of the world’s leading snacking companies with brands including McVitie’s, Ulker and Godiva Chocolatier. pladis delights consumers with products across the snacking category including sweet and savoury biscuits, wafer, cake, chocolate, gum and candy. pladis has a 26,000-strong global workforce in 34 factories in 13 countries, with annual revenues of £2.2 billion.

The company has already delivered a series of successful product innovations in the biscuit and chocolate categories since the group was created, which include Godiva for retail, McVitie’s Nibbles and McVitie’s Chocolate Digestive Thins – products which have fast become firm favourites in pladis’ anchor markets.