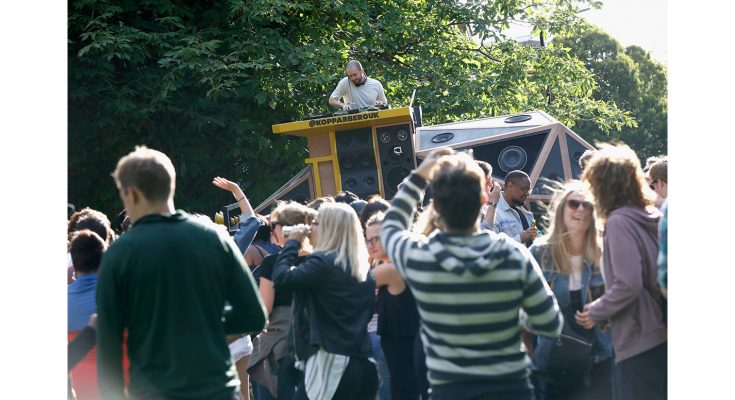 The Recycling Rig, which made its first appearance in London parks and other hotspots over the late August Bank Holiday weekend, is the latest installment of Kopparberg’s ‘Fånga Dagen’ campaign.

Built from up-cycled materials including reclaimed wood, the three-metre-high Recycling Rig features a total of 30 music speakers and a resident DJ who plays music in return for empty bottles and cans.

The more rubbish handed in, the longer the music plays. In return for their empties, the truck will play remixes of popular classics and summer inspired hits.

Devised by agency 18 Feet & Rising, in partnership with GoodStuff, W Communications and Bigger, the two-week summer activity will be leveraged across multiple channels, including digital, experiential, PR and social media.

The Recycling Rig is the next evolution in Kopparberg’s ‘Fånga Dagen’ brand promise – ‘Fånga Dagen’ is the Swedish equivalent of ‘life is what you make it’. Capturing the pioneering spirit of being alive and ‘in the moment’, Kopparberg says it’s a feeling that is encapsulated within Kopparberg town and the independent brewery that still operates there today.

Rob Salvesen, Senior Marketing Manager at Kopparberg, commented: “We’ve launched the Recycling Rig because it captures that spirit of ‘Fånga Dagen’ – it’s encouraging us all to do our bit to keep our parks green, while having a great time too. It’s a mindset we live by in Kopparberg town and the reason why our brand was created 24 years ago.”

Will Thacker, Creative Director at 18 Feet and Rising, says, “While we are all experts at enjoying the weather, we’re usually much less gifted at cleaning up after a party. We wanted to raise awareness of this in an unsuspecting but entertaining way. As Kopparberg’s retained ATL agency we are constantly working together to find more dynamic and interesting ways to bring awareness of the brand to consumers, while doing good and sharing positive messages.”

Sam Drake, Managing Partner at Goodstuff, adds: “We are always looking to deliver campaigns that set Kopparberg apart from the category. A giant-size, music-playing, recycling machine does exactly that. Working in true agency collaboration alongside some leading social influencers we believe we have all the ingredients for a campaign that nails our Fånga Dagen philosophy. Skal.”

The Kopparberg Bryggeri (Kopparberg Brewery) is based in the small Swedish town of the same name, and was founded in 1882. The brewery is a family-owned independent company.