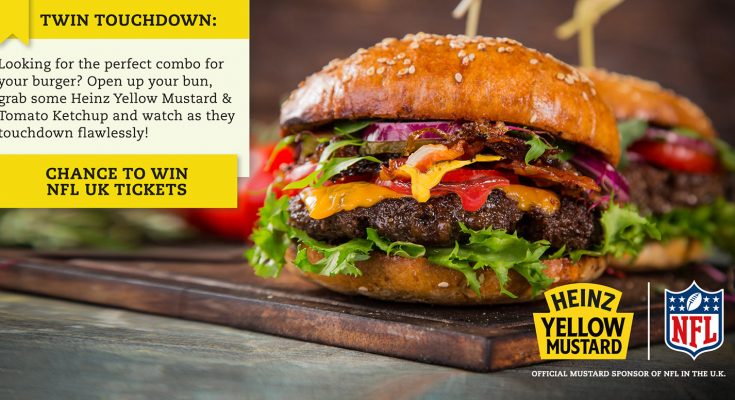 Heinz Yellow Mustard is marking its partnership as the new Official Mustard sponsor of the NFL in the UK with an integrated campaign which includes a competition to win a range of prizes including a trip to Super Bowl LII in Minneapolis.

Heinz’s partnership with NFL UK is brought to life through the Ultimate Playbook, a series of creative assets designed for social, print and outdoor channels, supported by in-store execution in Tesco featuring POS, and shippers.

The NFL has played 17 regular season games in London in the past decade and is set to play four fixtures for the first time this season, including two at Wembley and Twickenham Stadiums. Television coverage is carried by the BBC, Sky Sports, iPlayer and GamePass, attracting audiences of around 23 million.

Fans are being challenged to upload their “ultimate play” to the Ultimate Playbook to be in with the chance of winning the main prize. The competition runs throughout the NFL’s London games season.

The promotion has been put together for Heinz UK by creative social agency Media Bounty.

Joel Hughes, senior brand manager, Heinz Yellow Mustard, said: “The partnership between our mustard and the NFL in the UK is extremely exciting as it places Heinz Yellow Mustard as the go-to condiment at the NFL games, therefore driving further awareness of the brand and its fantastic taste credentials.”

Media Bounty managing director Jake Dubbins says: “To add colour and flavour, we’ve created a series of visual assets which explore the different rules and regulations of NFL. These draw on the game’s glossary to explain terms such as fumble and touchdown, aligning Heinz Yellow Mustard as the perfect accompaniment for game day staples like hot dogs and burgers.”

In each of the first two periods, 20 fans will win pairs of tickets to various NFL UK games at either Wembley or Twickenham stadiums. In the third draw period, 25 winners will each receive an NFL merchandise bundle worth £200.

In the final draw period, one winner will receive a trip for themselves and a guest to visit Minneapolis and attend Super Bowl LII on February 4th 2018. The prize includes return economy flights from a London airport to Minneapolis, transfers to and from the hotel, three nights in a 4* hotel in Minneapolis sharing a twin or double room, daily breakfast, two tickets to Super Bowl LII and £300 spending money.

There is need to buy the product to enter. To take part, fans have to go to nfl.heinz.co.uk and submit their tip or tips to create the ultimate game day meal, in no more than 500 characters. One tip can be entered per draw period.

Upon submitting a tip, entrants will be prompted to share the promotion. Entrants can share the suggested caption, or a caption of their choosing including “heinz.co.uk/NFL” on Twitter for an additional entry to the active prize draw.

Winners will be selected at random from all valid entries via an independently verified, randomised computer process within one working day of each draw’s closing date.