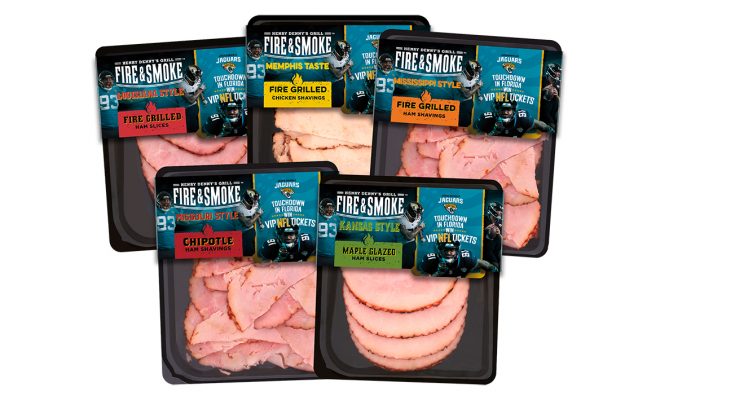 Kerry Foods is supporting its Fire & Smoke cooked meats range with a partnership with US NFL team the Jacksonville Jaguars, including a competition to win the star prize of a trip to Florida, plus a VIP experience at a Jacksonville Jaguars game and a behind-the-scenes stadium tour at TIAA Bank Field.

Fire & Smoke will become the Official Meat Partner of the Jaguars and the Jaguars Se7ens Cup, a flag football tournament giving UK participants a chance to compete for an all-expenses paid trip to the Super Bowl.

Fire & Smoke will also have a presence across the Jaguars social channels all year round, while Kerry Foods will be running experiential activity, sampling and digital support for the partnership.

American Football has become one of the most popular sports in the UK and Ireland, driven by the success of the NFL International Series, and now boasts over 13 million fans in this country. Kerry Foods says it has partnered with the Jaguars because they are the only NFL team with a long term commitment to the UK.

Anna Moore, Senior Brand Manager for Kerry Foods’ Meat Portfolio, says: “We’re incredibly excited to be announcing this partnership and with the increasing popularity of American Football in the UK we’re sure this will excite and delight our consumers. As a result, we’re expecting the partnership to be a touchdown performance, resulting in a roaring sales success.”

Hussain Naqi, Senior Vice President International Development for the Jacksonville Jaguars, adds: “We feel proud and privileged to be partnering with such a great UK & Ireland based organisation but also with a brand who shares and understands our southern US values. We are excited to bring that flavour to life through American Football for millions of consumers around the UK and continue to grow our transatlantic efforts through great partnerships.”

To enter the on-pack prize draw, consumers have to buy a promotional pack of Fire & Smoke, go to fireandsmokeflorida.co.uk and provide their personal details plus the receipt.

The winner will receive a seven night stay in Florida for two adults including flights, accommodation, hire car or transfers in Florida, $250 spending money and VIP NFL tickets including a locker room tour and a Jaguars game of choice in Jacksonville during December 2018. Three runners-up will receive prizes of signed team merchandise.