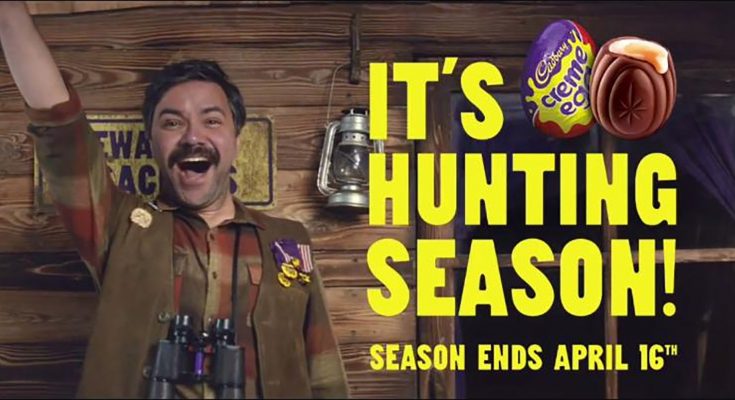 Mondelez is backing its latest Cadbury Creme Egg TV ad, the brand’s first new creative campaign in four years, with an on-pack promotion offering one consumer a day the chance to win £1,000, plus a trade promotion for retailers.

The “It’s Creme Egg Hunting Season” campaign will be supported with a £4m media investment, spanning TV, social, experiential and PR, forming part of a wider £10m marketing investment for all Cadbury brands across the 2017 Easter season.

Gregg is shown on the porch of his custom built Creme Egg Hunting Lodge on wheels, when he spots a Cadbury delivery van containing the season’s first batch of chocolates. Unable to contain his excitement, he sounds his hunting horn and chases after the van, joined by an eclectic mix of fellow Creme Egg fans on a range of vehicles including a ride-on lawnmower, motorbike and sidecar and even rollerblades.

The Cadbury on-pack activity, which is exclusive to the convenience market, marks the return of the Cadbury Creme Egg’s Gooless promotion for 2017. Running from January 1st until Easter Sunday, one consumer every day who buys a gooless Creme Egg will be in with the chance to win up to £1,000. The prize will then be matched for the relevant retailer with either stock vouchers or Love2Shop vouchers.

Cadbury’s Creme Egg first unveiled eggs without the goo for the first time in 2013; 90 eggs were made without the fondant filling as part of a three-month nationwide promotion.

The eggs feature a ‘you’re a winner’ ticket inside instead of goo, but will be indistinguishable from the usual Creme Eggs in terms of looks and weight.

The brand is also giving retailers another chance to win in the lead up to the spring season 2017 with its ‘Take a Shelfie’ competition. Retailers who upload a photo of their Gooless Cadbury Creme Egg display before March 31st 2017 to www.deliciousdisplay.co.uk will be entered into a prize draw for the chance to win up to £250 in Love2Shop vouchers.

Hortense Foult-Rothenburger, senior brand manager for Cadbury Easter, said: “Every year, Cadbury Creme Egg devotees tell us how excited they are that Cadbury Creme Eggs are back on shelves, and the success we’ve seen in 2016 is testament to the fact that fan’s love for the product has not waned.  We have incredible plans for 2017 and are more excited than ever to kick it off with our brand new creative; It’s Creme Egg Hunting Season.”