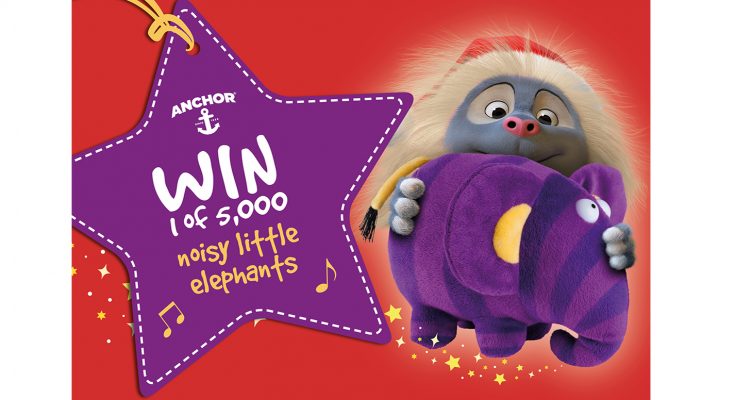 The TV ad features a baby Huggler being given the toy by granny; mum is then left to endure the resulting aural assault as her child repeatedly triggers the elephant’s trumpeting.

The promotion was created for Anchor by integrated agency whynot! thinkpeople.

Taking inspiration from Anchor’s Christmas ad, the agency brought to life the noisy little elephant in a limited edition of 5,000. Promotional packs offering the chance to win one are in store now; winners are greeted online with video snippets that showcase the full joy (or horror) of what they have just let themselves in for.

The activity runs across special packs of Anchor Spreadable and Anchor Cheddar until December 14th. To enter the promotion, consumers have to buy a promotional Anchor Christmas pack of Anchor Spreadable and enter the code from the pack along with their name and email address via the microsite www.anchorgoodstuff.co.uk/christmas. There is a ‘No Purchase Necessary’ route for consumers in Northern Ireland.

Entrants will find out instantly whether or not they have won. Winners on desktops will be shown a short video before the presentation of the prize information.

The Anchor brand is owned by Scandinavian-based dairy cooperative Arla Foods, which launched a major £6m campaign repositioning it as a “great tasting dairy brand, not just a butter brand” in June 2015. A series of TV ads aired then introduced the Hugglers for the first time. Earlier in 2015, Anchor ran a massive sampling campaign giving out 500,000 cheese sandwiches as part of a ‘Save our Cheese Sandwich’ roadshow.