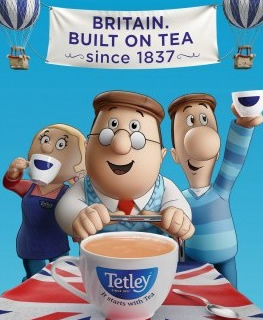 Tetley is investing £10m in an integrated and shopper marketing campaign to change consumers’ attitudes to tea, with a particular focus on the younger demographics.

The plans will include mobile apps to drive people to the tea aisle. It is likely Tetley will also deploy some other high tech solutions, such as the holographic Gaffer display currently being used in cash-and-carry outlets.

Andrew Pearl, Director of Shopper and Customer Marketing for the tea brand, says: “Shopper engagement is the biggest driver of growth, so our 2016 programme will target shoppers at each stage of the shopper journey from creating initial desire to engagement at fixture and selection and purchase.”

A new television ad for Tetley’s will break on January 8th, reflecting the new ad campaign positioning, “It Starts With Tea”. The ad will run for eight weeks until March and will be repeated in April.

It celebrates the best of Britain from 1837 – the year the Tetley brothers first set up their business in Yorkshire – to today by showing brand characters Gaffer and the team taking a well-earned tea break and peering into Britain’s past to see British heroes like Florence Nightingale, Winston Churchill, legendary British Rock stars and sporting giants celebrating with tea.

The new ‘It Starts With Tea’ positioning will be rolled out in print, digital and social media as well as in store and in-depot. PR activity will include the publication of exclusive research into the nation’s current attitudes to Britishness.

Pearl says that in store new high impact branded displays will pop up at strategic retail locations across the UK, while Tetley’s new pack designs will appear across the range.

Clearer signposting, education materials and fresh new ways to present the tea category are all under review and will be executed in the coming year.

Pearl observes: “New shopper research has helped us identify the behavioural traits and tastes of different types of shopper by retail channel and we are using this to refine our category management advice and the way in which we engage with shoppers.”

Mobile and social media is particularly effective at reaching younger audiences; Tetley will be leveraging its position as the number 1 tea brand on social media during 2016, he adds.

“We are expanding our marketing to incorporate mobile apps that drive shoppers to the tea fixture and reward them for purchase and tailored promotions linked to behaviour in-store.”

Tetley is the largest tea company in the UK and is a wholly owned subsidiary of Tata Global Beverages, the second largest manufacturer of tea in the world after Unilever.