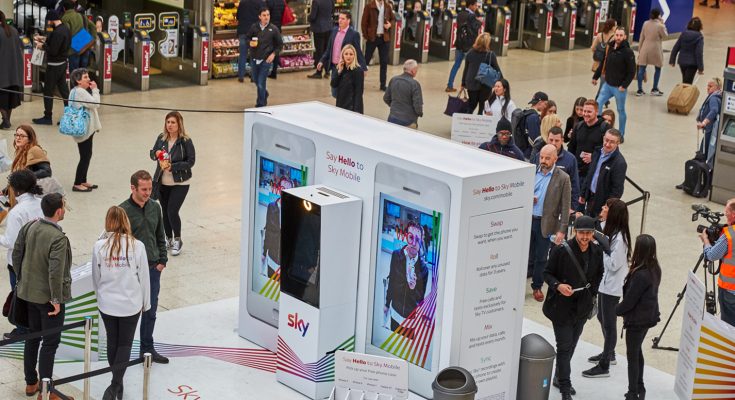 The activity will see thousands of Sky Mobile-branded phone cases distributed to the public, as well as offering the chance to win prizes on the spot through a ‘Photo Pod’ selfie experience.

tpf is managing the distribution of Sky Mobile-branded phone cases to commuters at London’s Waterloo, Victoria and Liverpool Street stations, and the agency has also created ‘Photo Pods’ to immediately reward on the spot winners to celebrate the launch of the network.

The Photo Pods were designed by independent agency tpf, and feature a bespoke algorithm that randomly select winners throughout the eight-day activation. To be in with a chance of winning a prize, entrants are encouraged to take a selfie in one of the photo pods showing off their new Sky Mobile phone case.

The campaign began on Friday March 31st and will last until Friday April 7th.

In addition to the station activations, roaming brand ambassadors will be handing out more free branded Sky Mobile phone cases to businesses in London.

tpf has managed the project from conceptualisation through to on-the-day organisation, planning the logistics of activity which runs across 96 hours it total, with more than 2,000 prizes to be won, including iPhones, Samsung Galaxy S7 Edges, Sky Q Packages and Sky Mobile sweets.

Bob Suppiah, Director of Promotions and Partnership Marketing at Sky UK, says: “The activity is a great example of all our agencies working together across media planning, outdoor, and promotions; with tpf instrumental in pulling this together for the live experiential activity.”

Dan Meiland, Director, tpf, adds: “Helping with the launch of Sky Mobile is an exciting and ambitious project for the company, and we’re pleased to lead the campaign on the ground with activity that will raise awareness amongst a very large and engaged audience. The Photo Pods will allow Sky to communicate key messaging to consumers in an interactive and fun way and signal the launch of Sky Mobile on a grand scale.”

The project follows on from tpf’s similar promotional activations with Sky, including the launch of Sky Q, Sky One drama Lucky Man, Sky Broadband Minions and Sky Cinema Christmas campaigns.

tpf is an independent agency specialising in promotions, publicity and digital marketing in TV, sport and entertainment, visit tpf.london for further information.