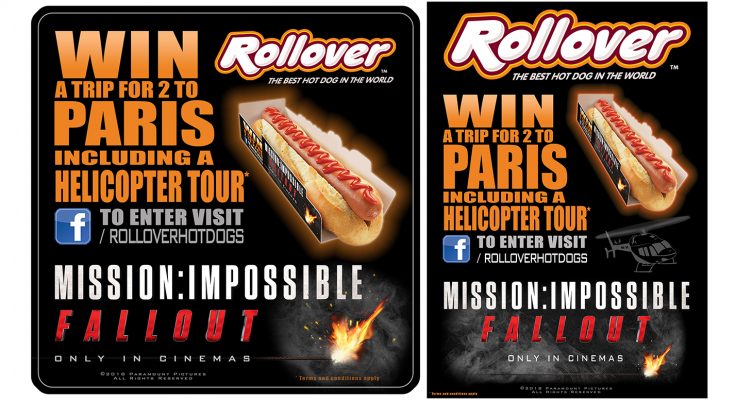 Rollover Hot Dogs is partnering with Mission: Impossible Fallout, the sixth film in the Mission: Impossible series (in UK cinemas 25th July) with a competition to win a romantic trip for two to Paris, including a helicopter tour from Paris to Versailles.

The Rollover Hot Dog trays will feature artwork from the movie and will direct consumers to the Rollover Facebook page, where they will be able to enter the competition to win the trip to Paris. There are also Mission: Impossible movie products to be won.

The campaign aims to reach over 3 million shoppers and is being supported with extensive POS materials for retailers.

Rollover negotiated the partnership deal with the films’s UK distributor, Paramount Pictures, according to a Rollover spokesman.

Tony Owen, Sales and Marketing Director for Rollover Ltd, says: “This movie, starring Tom Cruise, is set to be one of the biggest releases of the summer and we’re extremely thrilled to renew our partnership with a film that our consumers will really love. It’s a fantastic promotion to make shoppers aware of the Hot Food To Go category and specifically Hot Dogs, which remain in huge growth due to the continued trend around Street Food.”

Owen adds: “Mission: Impossible’s core demographic of 16-30 year olds matches our brand personality: young, lively, and fun. We expect a lot of engagement with our fans on this promotion and it will encourage new discussions at the point of purchase.”

The Mission: Impossible campaign started on July 9th and runs for eight weeks.

Rollover Hot Dogs, which is part of Kerry Foods Group, is the UK’s largest hot dog brand, selling over 25 million a year. It supplies preparation equipment and marketing collateral (steamers and POS) free to stockists and sells them the consumable items (sausages and buns). Customers include sports venues such as Old Trafford, theme parks, cinemas, universities and contract caterers. It regularly runs partnership campaigns with hit movies.